Governor Ige seems to be giving control of the state to corporate interests.

First Ige nominated Carleton Ching to head the Department of Land and Natural Resources, a body he has spent his entire career trying to weaken.

Babes Against Biotech raised the alarm about Decoite’s Monsanto connection last week: “On behalf of our 39,000 supporters, and as believers in the Democratic Party, we feel it is necessary to express our concern regarding one of the candidates for the recently vacated district 13 seat, Mrs. Lynn DeCoite.

We have been aware for some time that L&R Farms, owned by Mrs. Decoite, is under contract with Monsanto to grow seed corn. Lynn herself confirmed this to our Maui Chapter Coordinator over an extensive phone conversation in March of last year; it is not something she is ashamed to admit. …

If Mrs. DeCoite is chosen by your committee to be on the short list given to the Governor, you will be sending him another political powder keg. This nomination would create an even larger firestorm of public criticism and discontent, than his highly contentious nomination of Carleton Ching to lead the Department of Land and Natural Resources.

It is no secret that the GMO issue is a political hot bed on both County and State levels. We feel that nominating a GMO Farmer to the position of State Representative, would be a political disaster and incite justifiable outrage.” 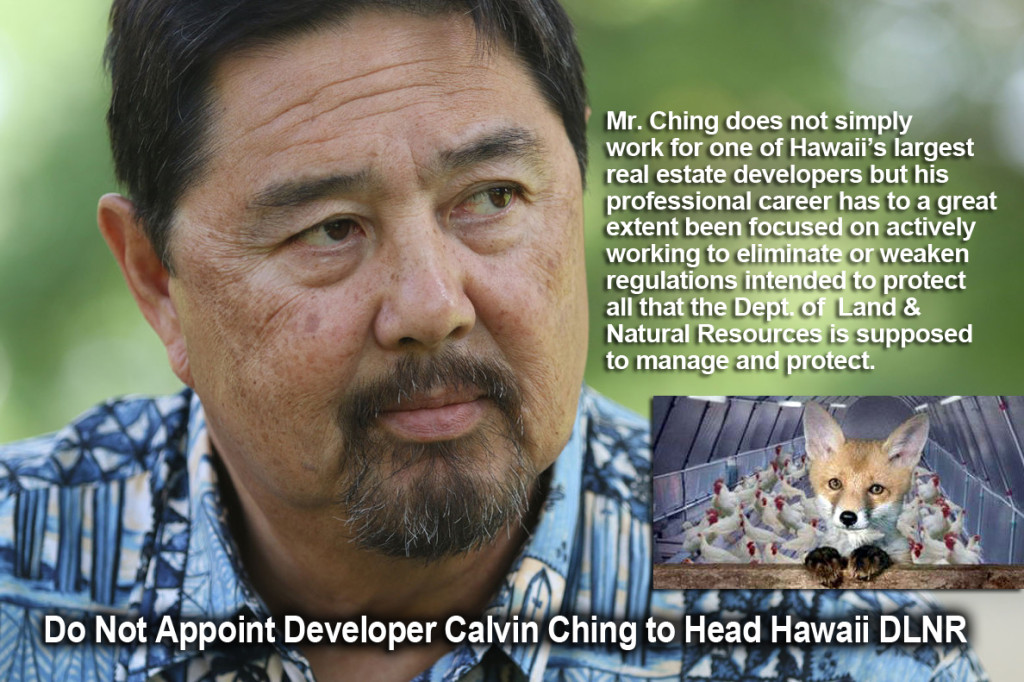 Click here to sign a petition calling for Ige to Drop Ching, but given how he’s moving so far don’t hold your breath. Looks like Hawaii’s environment, and the people’s health, will be attacked repeatedly over the next four years.