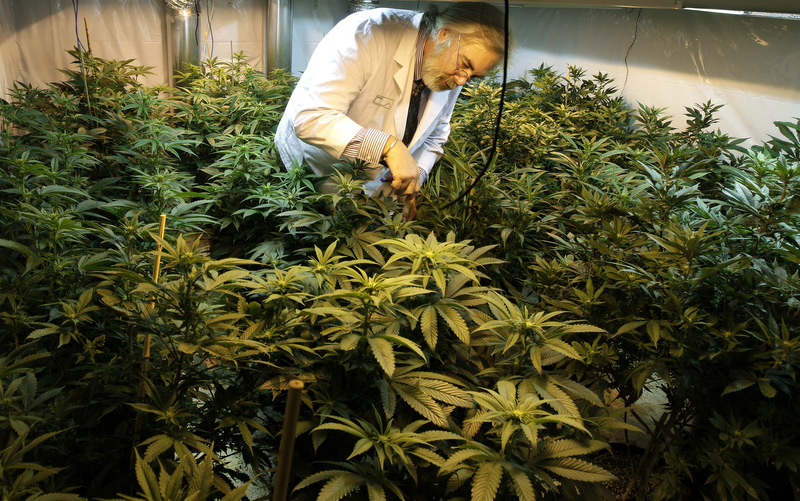 Monsanto denies a recurring urban legend that suggests the controversial agribusiness giant has patented a GMO marijuana strain. Yet, as the cannabis industry continues to grow, it only seems more and more likely that Big Ag should be trying to cash in.

Did Monsanto just become the first corporation to patent a strain of genetically modified marijuana?

“All characters appearing in the articles in this website – even those based on real people –  are entirely fictional and any resemblance between them and any persons, living, dead, or undead is purely a miracle.”

But in publishing this hoax, World News Daily Report is merely capitalizing on what appears to be a popular urban legend.

In 2013, Tracy Glesz-Ramsay wrote in Cannabis Culture magazine, “Monsanto, Syngenta, BASF, Bayer, Dow and DuPont have … developed a keen interest in this still-illegal plant as well.”

Last year, Israeli agribusiness BreedIT quoted the urban legend as fact in a press release that was then reprinted widely.

None of these articles cite sources, and a MintPress search of public patent databases proved fruitless. Monsanto marijuana is an urban legend, much like the belief that Marlboro is developing mass-produced joints for sale.

It’s so popular that Monsanto even debunked the myth on their website: “Monsanto has not and is not working on GMO marijuana. This allegation is an Internet rumor and lie.”

Urban legends like these reflect a growing awareness that cannabis is becoming big business — and that awareness is based in fact. With the success of legalization efforts in states like Colorado, hundreds of small business from dispensaries to chefs have made fortunes on marijuana. These successes have even caught the attention of larger corporations as well.

The Scotts Miracle-Gro Co. is the exclusive marketer of Monsanto’s Roundup weed-killer for the North American consumer market.

Monsanto is investing heavily in new agricultural technologies, including a 2013 $1 billion buy-out of agtech startup Climate Corp. Other agricultural startup investments have centered on cannabis. In February, Snoop Dogg announced the launch of a $25 million weed venture capital fund. Privateer Holdings, another cannabis investment fund, has ties to Bob Marley’s heirs and was recently valued at $425 million, with holdings in companies like Leafly, which TechCrunch called “a Yelp for pot.”

Monsanto and marijuana do have one other, real connection: Fezisa Mdibi, writing for Africa’s Mail & Guardian, reported last month that police in South Africa used Kilo Max — an herbicide based on glyphosate, the chemical Monsanto developed for use in Roundup — to destroy cannabis fields grown by traditional farmers, who call the plant “dagga.”

Mounting evidence suggests glyphosate can be linked to cancer, including a recent study by the World Health Organization.