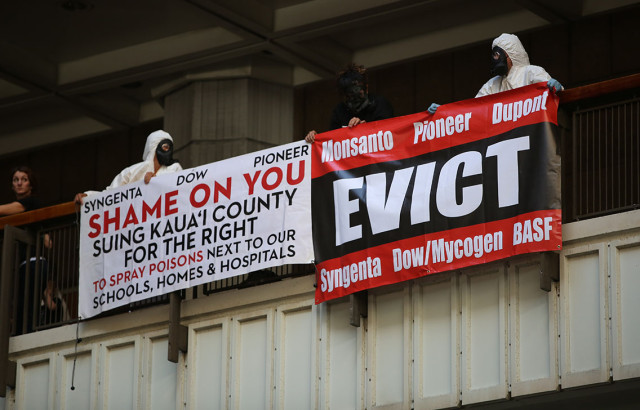 HONOLULU – A federal judge said Monday that the key question before her in lawsuits related to a Maui County ban on the cultivation of genetically modified crops is whether federal and state law trump county law.

Michael Carroll, a lawyer for a citizens group that sponsored a Maui County ballot initiative creating the ban, told Mollway that the federal and state governments aren’t regulating genetically engineered crops, so the county has the authority to regulate them.

But an attorney for Monsanto Co. and Dow Chemical Co. unit Agrigenetics Inc. — both of which research genetically engineered crops in Maui County — told Mollway the state and federal governments already regulate the crops. Margery Bronster said the county doesn’t have the authority to do so.

Mollway is considering two separate lawsuits on the issue.

The first, filed by the seed companies and their allies, challenges a Maui County law created when voters passed a ballot initiative last year. The law imposes a moratorium on GMO crops until scientific studies are conducted on their safety and benefits.

The second, filed by five citizens who sponsored the ballot initiative, seeks to compel the county to enforce the ordinance.

Both Bronster and Carroll pointed to work performed by a Hawaii state Department of Agriculture biotechnology specialist to support their arguments.

Bronster said the specialist’s mandate was to inspect every regulated field in the state, and he conducted more than 1,000 inspections on fields during the last fiscal year.

“The regulations at both the state and federal level set out elaborate requirements of what needs to be done,” Bronster told Mollway.

But Carroll countered that the same state worker testified he found dozens of herbicides during his inspections, but he didn’t know what they meant because there weren’t any Environmental Protection Agency benchmarks or health standards for the substances.

Mark Sheehan, one of the five citizens, was disappointed that Mollway’s questions focused on whether state and federal law pre-empt county law.

“That the people might have a right to health was of no concern,” said Sheehan, who is a member of the Sustainable Hawaiian Agriculture for the Keiki and the Aina Movement or SHAKA.

There has been little scientific evidence to prove that foods grown from engineered seeds are less safe than their conventional counterparts. But fears persist in Hawaii and elsewhere. In the islands, these concerns are compounded by worries about the companies’ use of pesticides.

Hawaii’s year-round warm weather makes the islands a favorite research spot for companies that use genetic engineering to develop new types of corn and other crops. The weather allows researchers to grow more generations of crops and accelerate their development of new varieties.

Monsanto has two farms in Maui County, on Maui and Molokai islands. Agrigenetics, which does business as Mycogen Seeds, has a farm on Molokai.

“I don’t know if this is quotable, but it sucked,” Mark Sheehan, a member of the SHAKA Movement, said of Monday’s hearing.

The SHAKA Movement is the grassroots organization that advocated to get the moratorium approved last fall despite Monsanto and Dow AgroSciences spending over $7 million to defeat the initiative.

The bill hasn’t gone into effect due to a legal challenge from biotech companies and local businesses who argue that federal, state and county laws preempt the ordinance. The SHAKA Movement filed a separate case seeking to force the county to enforce the bill. Monday’s hearing dealt with both cases.

Observers said Mollway spent much of the hearing grilling Michael Carroll, the attorney representing the SHAKA Movement, about whether the county has the authority to regulate agriculture.

Within the past year, another federal judge, Barry Kurren, has struck down Kauai County and Hawaii Countys attempts to regulate pesticide use and genetically modified farming. Kurren ruled that state law doesn’t give counties that authority.

“I’m optimistic that if we don’t win at the district court level then we’ll win on appeal,” Carroll said in a phone interview after the hearing.