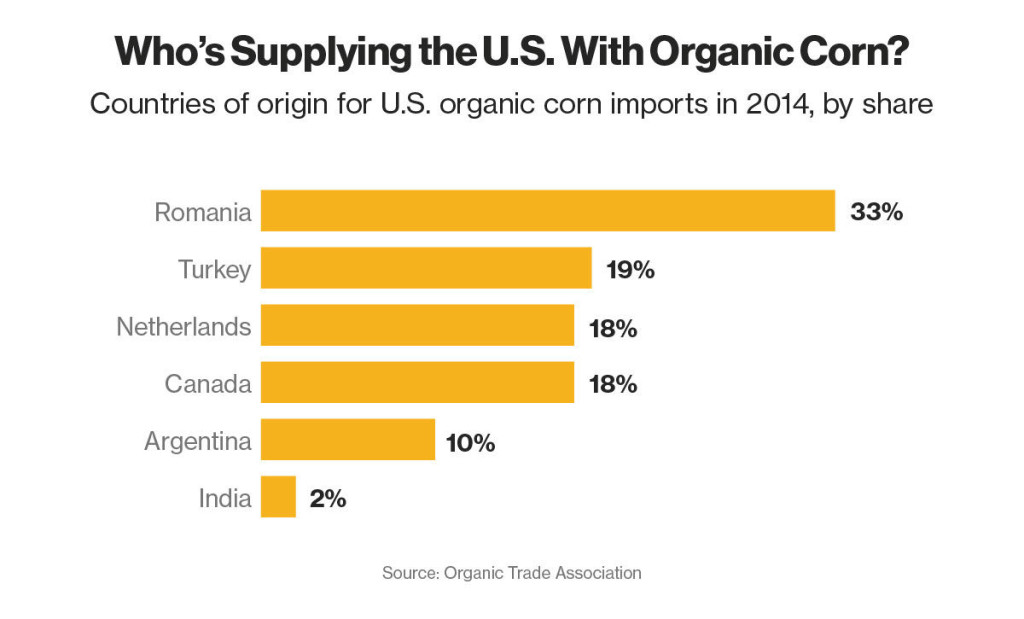 A growing demand for organics, and the near-total reliance by U.S. farmers on genetically modified corn and soybeans, is driving a surge in imports from other nations where crops largely are free of bioengineering.

Imports such as corn from Romania and soybeans from India are booming, according to an analysis of U.S. trade data released Wednesday by the Organic Trade Association and Pennsylvania State University.

The report is “a help-wanted sign” for U.S. farmers, Batcha said. “There are market distortions that are pretty striking.”

Most of the corn and soybean shipments become feed for chickens and cows so they can be certified organic under U.S. Department of Agriculture guidelines. Organic poultry and dairy operators shun feed made with seeds from Monsanto Co. and other domestic suppliers in favor of foreign products even as the U.S. remains the world’s top grower of corn and soybeans.

Sales of foods certified by the U.S. as free of synthetic chemicals or genetic engineering reached $35.9 billion in 2014, an 11 percent increase over 2013 and about 5.1 percent of U.S. grocery spending. The organic sector’s average annual growth of about 10 percent is triple that of overall food sales, according to U.S. Department of Agriculture and trade association data.

About 90 percent of U.S. corn and soy is bioengineered, thus automatically ineligible for the organic label.

Just north of the Minnesota-Iowa border, on a dirt road closed to heavy truck traffic by the late-spring mud, Hy View Feeds has seen its sales quadruple since winning organic certification a decade ago. Unlike nearby conventional feed stores that buys mostly from suppliers within a half-hour drive, Hy View gets some from Canada, more than 500 miles from its Mabel headquarters, to make up for domestic shortages.
Limited Data

“It’s a market that not everyone is going to get into because it’s done on a different scale,” said Kit VandeMark, owner and founder of Hy View, which categorizes its feeds as conventional, organic and non-GMO. “So we end up with both buyers and sellers from a broader area.”

The USDA only began collecting data on organic crops in 2011. Most of what’s tracked is fresh produce and major grains – – processed foods and meats, for example, aren’t reported in an organic category.

Soybeans are the second-biggest U.S. organic import, with $184 million shipped last year. India is the No. 1 source, followed by China. For corn, with overall sales of $35.7 million in 2014, Romania is the biggest seller to the U.S., followed by Turkey, the Netherlands and Canada.

The totals are tiny compared with the combined $92.7 billion value of the two crops last year. That also means that the domestic market could easily meet organic needs, McEvoy said. In reality, U.S. farming isn’t structured to meet some of its highest-dollar consumers’ needs, he said.

“There just hasn’t been enough development of the organic feed supply in the U.S.,” he said. Organic-foods certifiers are in short supply in some regions, he said.

A requirement that all organic farms be free of non-organic seeds and chemicals for three years means farmers give up profit before gaining any price benefit. Recent high prices that fed record farm profits also gave growers less reason to switch, he said.
Organic Prices

“If there were a market incentive for more people to produce organic corn, there would be more of it,” said Paul Bertels, vice president for production and utilization with the National Corn Growers Association in St. Louis. Even though organic corn is selling for about $12.50 a bushel, more than triple the cash price for regular corn, lower yields and the three-year transition period makes GMO- and synthetics-free grain not worth the risk, he said.

“It’s not worth the headache or the cost” for most producers, he said.

In some cases, nations where farming is less industrial are seizing the advantage. Genetically modified seeds are largely absent from Romania and Ukraine, putting their farmers closer to organic certification for sales in the U.S., McEvoy said.

“With the markets at break-even prices for many farmers, we’re seeing more interest in organic land,” he said. “I’m not predicting a tidal wave, but I’m seeing twice as much interest in this as I have in the past.”