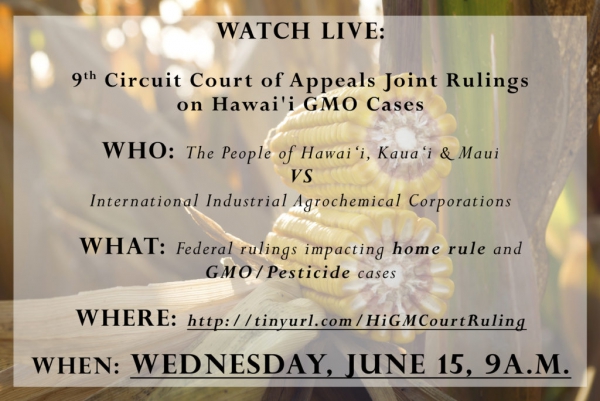 9th Circuit Court Hearing on Hawai’i GMO Cases
The Ninth Circuit Court of Appeals announced that they will hear The SHAKA Movements Appeals of Judge Mollway’s decisions at 9:00 AM, on Wednesday June 15th, at the Federal Bankruptcy Court Building in Honolulu. The Court also announced that the same 3 Judge Panel that will be considering the two SHAKA appeals will also hearing the Appeals of the Kauai and Hawaii County – cases as decided by Magistrate Judge Kurren. The oral arguments presented will all be distinct and not combined.

Visualize these 3 judges making the highest and correct decision for the people.

Sidney Runyan Thomas is a 62 year old Chief United States Circuit Judge of the United States Court of Appeals for the Ninth Circuit. He was appointed by Bill Clinton. His chambers are located in Billings, Montana. He has a reputation for being even handed.

On September 20, 2005, the New York Timesnamed Callahan as a possible successor forUnited States Supreme Court justice Sandra Day O’Connor[2] She was supported by someDemocrats and the Congressional Hispanic Caucus as being more moderate than many of Bush’s other appointees.

I am writing to let you know about an important new petition, asking concerned citizens to stand in solidarity with the People of Hawaii, the SHAKA Movement, The Center for Food Safety and Earthjustice in their historic effort to overturn the democracy-threatening Monsanto Doctrine: which is the shocking new power of agrochemical corporations to do whatever they want in defiance of local laws.

On June 15 a panel of federal judges from the Ninth Circuit Court will meet in Honolulu to hear oral arguments from four important cases that may result in the most important GMO-related decision in history, the environmental equivalent of a Citizens United decision.

The appellate court will either uphold or overturn four recent decisions by the lower federal District Court in Hawaii that invalidated the power of county governments to enact laws that protect public health and the environment.

In cases involving the islands of Kauai and Hawaii a federal judge struck down local government laws that would have required buffer zones to prevent pesticide spraying near schools, and open air genetic engineering experiments that were seen as threatening to local organic agriculture.

A different federal judge from the same Hawaii court made history last year when in two separate court decisions (involving the islands of Maui and Molokai) the result of a citizen’s initiative, that passed during the 2014 election, was invalidated.

Under this new Monsanto Doctrine (you can watch an animated two minute video about it here), the regulatory agencies created to protect public health and the food supply of our citizens have been reinvented as legal shields to protect the world’s most toxic agrochemical companies from the authority of local government to provide that very protection to its citizens.

If left standing, this same Monsanto Doctrine will be employed as a weapon against common sense health regulations around the world, through international trade agreements like NAFTA, the TPIP and (if unstopped) the TPP, preventing entire countries from safeguarding public health.

Please join the people around the world who are signing this petition to restore the essential human right of the people, through our democratic institutions, to protect public health and our environment.

With gratitude, affection and ALOHA,