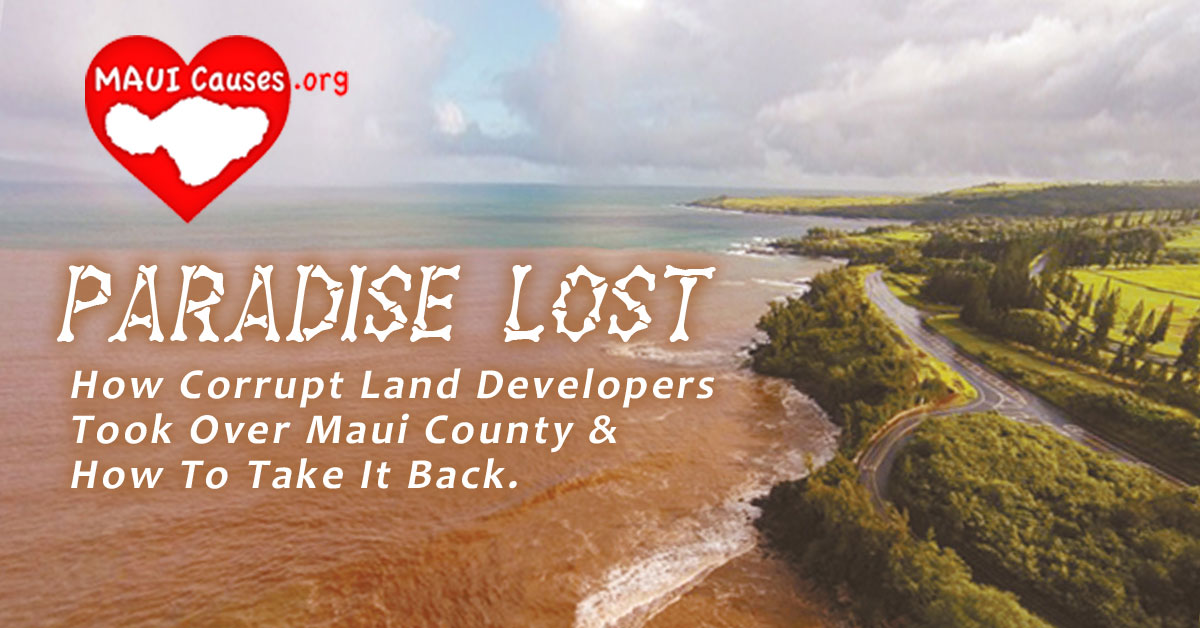 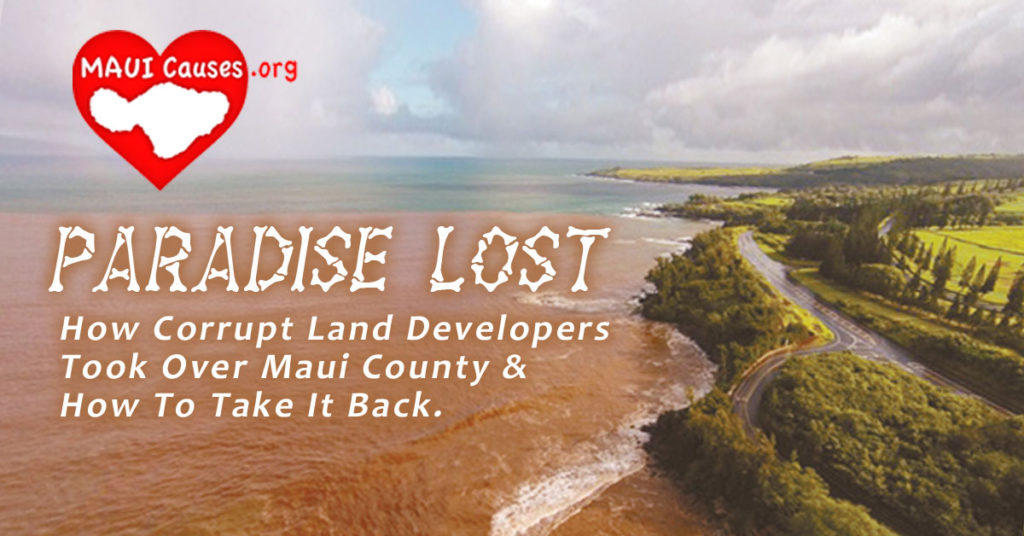 1. Project goals: Maui Causes is seeking financial support to launch a media campaign to expose the exploitation of long-standing loopholes in the Maui County Code and Shoreline Management Area rules. Private developers, their paid consultants, and a revolving door of politically appointed department Directors continue to manipulate our disjointed County ordinances, denying our community of our rights to public hearings to ensure compliance with environmental laws.

The many misrepresentations of Greg Brown’s massive “Single-Family Hotel” at Napili Bay are just cause to invalidate the SMA permit exemptions our Planning Director incorrectly issued and to stop or at least modify his construction.

Let’s make this abuse a rallying cry to engage citizens to pressure our County Council to legislate a closing of these loopholes, once and for all.

2. The problem: For decades Corporation Counsel has intimidated the members of the County Council to block any investigation into the historic and ongoing collusion between the Mayor’s office, Directors of Planning and Public Works, licensed architects, engineers and attorneys, and influential, private real estate developers.

Legislative solutions to eliminate the loopholes in our County Code that hide corruption were written in 2013 and approved for legality and form by the lawyers at Council Services but are to this day being blocked by Corporation Counsel in order to prevent revealing the history of exploitation they have facilitated.

These loopholes allow licensed professionals to perpetrate fraud in SMA permit applications, department Directors to abuse their authority to selectively exempt favored developers while penalizing others, and for Corporation Counsel to declare anyone a “Potential Litigant” and hide everything behind a wall of obstruction in Executive Council Sessions.

We citizens end up paying the bills for developer’s infrastructure and litigation settlements and we are stripped of our rightful public oversight to protect our delicate shorelines and the quality of life in our communities, as empowered upon us by the Federal Coast Zone Management Act.

3. Today’s opportunity: Christopher Salem, a Naplili resident with an extensive background in land development, is currently employed as a legislative analyst in the Office of the Mayor and is actively blowing the whistle on the gross misrepresentations at Napili Bay by Greg Brown Development and negligence in Public Works and Planning’s administration of Brown’s inappropriate SMA permit exemptions and bogus building plans.

Had the legislative fix not been blocked by Corporation Counsel in 2013, Greg Brown’s monster “Hotel” never would have happened, but as it stands it is a glaring, current example of the same abuses that Chris Salem previously blew the whistle on which led to citizen-driven actions at Olowalu, Palama Drive, Pu’u Kahana, and others, forcing developers back years later to remediate outstanding issues or stop abusive construction altogether. 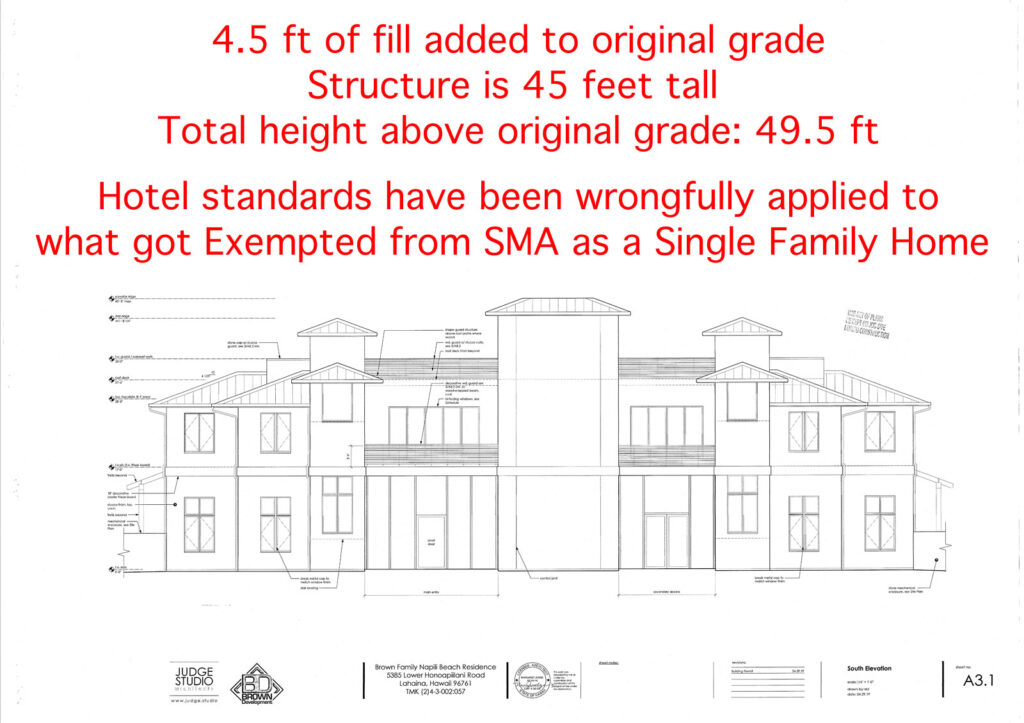 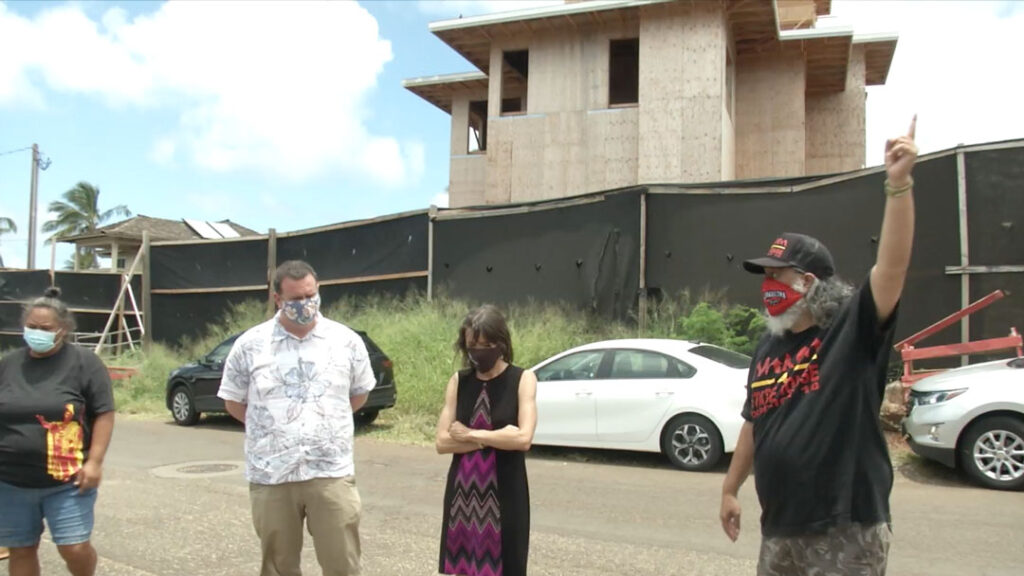 4. Our plan to force our County Council into action: With seed funding of $5000 to $7000, Maui Causes will launch a professionally coordinated and executed “grassroots” media campaign to leverage Salem’s whistleblower status, amplify objections already raised by community associations, and use our own media credibility and capabilities to rally the community to force the Council’s hands to pass legislation to close the loopholes and end this abuse once and for all.

5. Use of funds: Maui Causes has already generated some media materials; text, graphics, and video from the community meeting we helped stage, that can be enhanced and pushed out to the public using paid social media, local print, Oahu based TV, local radio and Akaku’s cable access channels. Paid media placement of new materials generated at additional public meetings we intend to produce can expand with the available budget once we get the ball rolling and community members with the means to contribute are engaged, perhaps through a public crowd-funding initiative.

7. More background:  Sam Small intends to perform the major roles of producer, writer, director, cameraman, and editor, having done all these tasks professionally for over 30 years for clients such as Prudential Financial, The New York Times, AT&T, Prudential and more.

In local politics, Sam served as the Media Director and Media Agency for the successful “SHAKA Movement” grassroots campaign, winning the 2014 Maui County GMO Moratorium against Monsanto and Dow who spent over $12 Million, the largest budget for a local ballot initiative in the history of the USA.

Additionally, in 2019, Sam  Small was instrumental in negotiating with newly elected Mayor Victorino to hire our long-standing consultant and advisor, Christopher Salem, as his own legislative assistant charged with closing the systemic loopholes. Putting Salem on staff was a historic blunder by the Mayor who, it appears, never intended to fix anything. Salem’s relentless pursuit of the public’s good and access to documents from within the administration has generated an enormous number of public documents that clearly reveal the abuses and allow Salem to bring this proof forward as a protected, County employee whistleblower.

Maui Cause article on Chris Salem

I’d be happy to speak to or meet with whoever is appropriate to discuss any aspect of this project and I look forward to your favorable response. Together we can make a difference!

MAKE A CONTRIBUTION VIA PAYPAL or REACH US DIRECTLY TO DISCUSS: