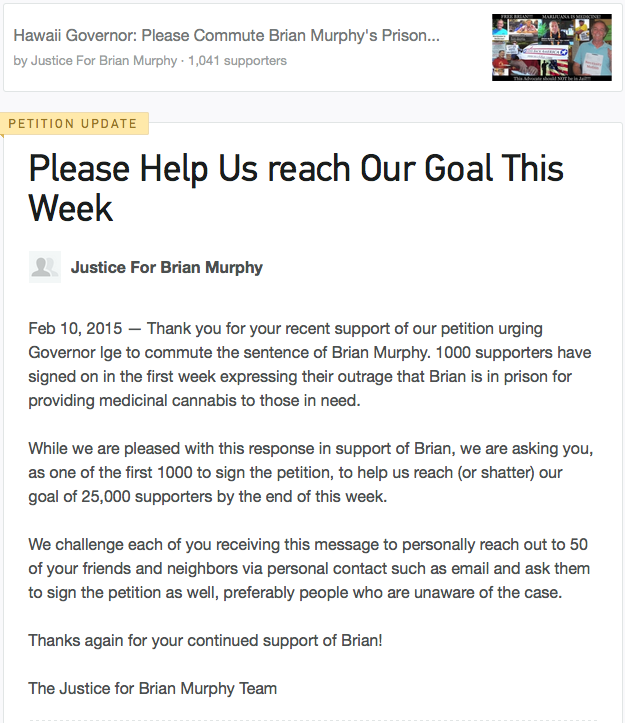 OVER 1,000 SIGNATURES SO FAR – ADD YOURSELF TO THE CHOIR, PLEASE ASK YOUR FRIENDS TOO!!

From 2005 to 2008, Brian Murphy, Director of the medical marijuana cooperative Patients Without Time, helped hundreds of gravely ill patients with proper permits maintain safe access to an adequate supply of their medicinal cannabis. Unfortunately Maui’s patients lost this safe access when the Maui Police arrested Director Murphy and his staff, in November of 2008, during the Maui Police Department’s “Operation Weedkiller.”

In 2009 the State of Hawaii issued a certification to Patients Without Time to thank PWT “for assisting over a thousand of Hawai’i’s certified medical marijuana patients with the acquisition of their medical marijuana.”

Despite this commendation, on Dec. 5, 2014 Brian was sentenced to 1 year in jail for a “criminal conspiracy” to sell marijuana, from the charges filed in 2008. Brian’s trial judge blocked the jury from knowing that Brian distributed ONLY MEDICAL MARIJUANA to ONLY CERTIFIED MEDICAL MARIJUANA PATIENTS.

It is a travesty of justice that Brian Murphy, a disabled veteran with serious medical issues stemming from his service, has been sentenced to a year in jail for the same activities for which the 2009 State House of Representatives congratulated him.

To this day, there is still no procedure in Hawai’i for registered patients to legally acquire their medical marijuana.

Adding injury to insult, Brian himself gets seizures that are well controlled with medical marijuana, but in prison he is being forced to take debilitating pharmaceuticals instead. Over the course of the first few weeks of his sentence, Brian’s health is already declining, making this a matter of great urgency. 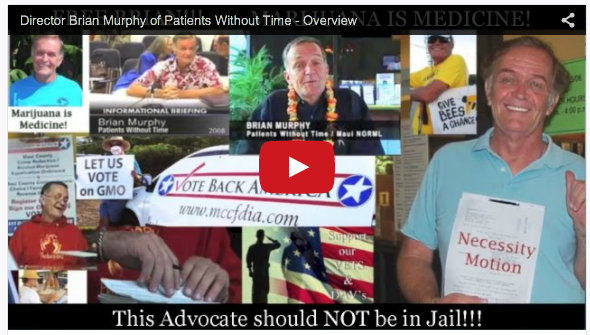 4 thoughts on “<p>Over 1K Petition Signatures So Far Requesting Release From Prison of Medical Cannabis Advocate Brian Murphy. ARE YOU ON BOARD? PLEASE SHARE!!!!</p>”