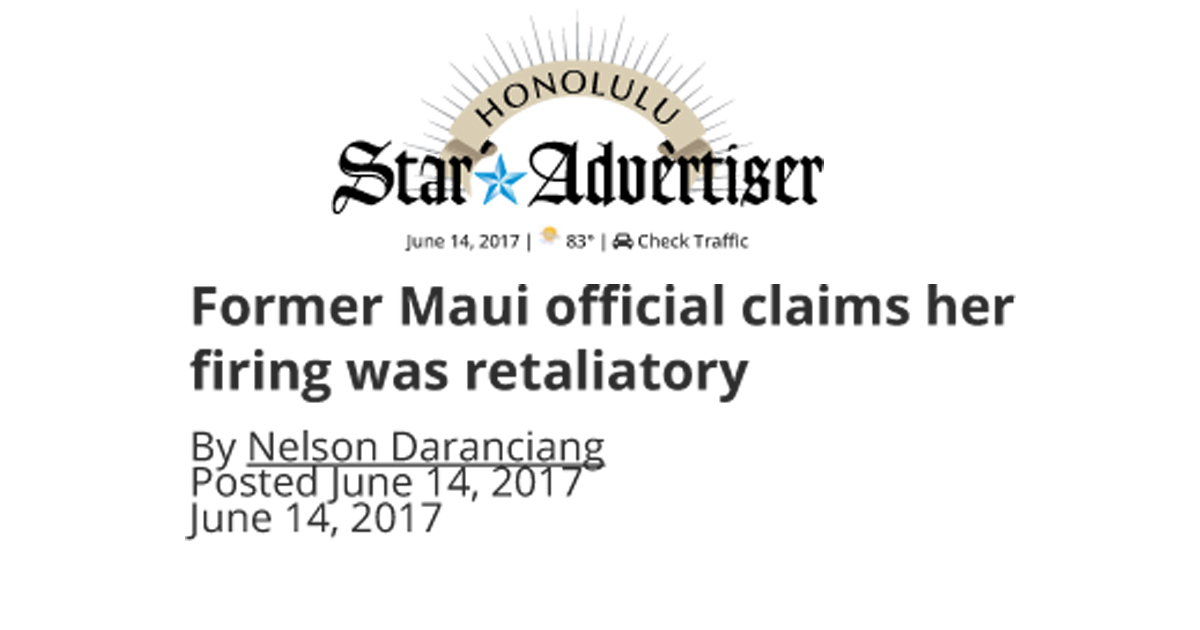 The former Maui County highways chief says in a federal whistleblower lawsuit that she was fired for reporting and investigating county worker abuses, including the repairing of private motor vehicles at county facilities on county time and with parts purchased using county pCards.

Lesli Lyn Otani says in the lawsuit that she was chief of field operations and maintenance for the county’s Department of Public Works when she reported the alleged abuses to the department’s director, David Goode, and deputy director, Rowena Dagdag-Andaya. Otani says Goode ignored her reports, tried to discourage her from investigating them, then fired her after she took her concerns and findings to the county’s Department of the Corporation Counsel.

Otani returned to her previous job as a county civil engineer. She is suing the county, its Department of Public Works and Goode. Otani filed her lawsuit in U.S. District Court on Tuesday. She says the Corporation Counsel has placed six employees of the highways division on paid leave while it investigates her reports.

The administrative investigation of the Public Works Department uncovered other alleged misconduct by two former employees. The county prosecutor charged Raynard Oshiro, a former district supervisor, and Lea Cadiz, a former Oshiro subordinate, with theft in December for allegedly taking uncharged vacation. Oshiro retired in 2015 after 38 years of service with the county. Cadiz was fired.

Otani says she was promoted to highways chief in April 2016 after the previous chief, Brian Hashiro, retired amid allegations that he used his county pCard to outfit the Wailuku base yard with a commercial-grade kitchen. She says she immediately started receiving reports of other alleged worker misconduct, including employees being forced to repair private vehicles at the Makawao Garage on weekends with parts purchased on county pCards, one employee driving an unmarked county vehicle for personal use and the undervaluing of county vehicles at trade-in.

She said when the county bought a new bulldozer, a supervising employee had the old one turned in to the dealer for zero trade-in value. The dealer then sold the old

bulldozer for $15,000 to $30,000. Otani says Goode extended her six-month probation in September, then fired her in March. She said during her probation Goode undermined her authority in front of her subordinates, which encouraged one to refuse to do the work necessary to clear debris from a September flood. She also said Dagdag-Andaya disclosed to others matters they discussed in a confidential conversation.

Maui County spokesman Rod Antone said the county does not comment on pending litigation, and he declined to comment on Otani’s claims. 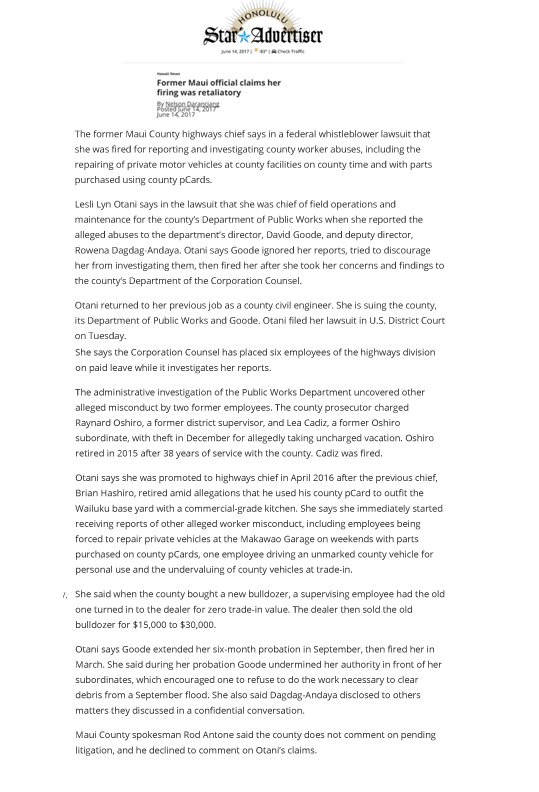