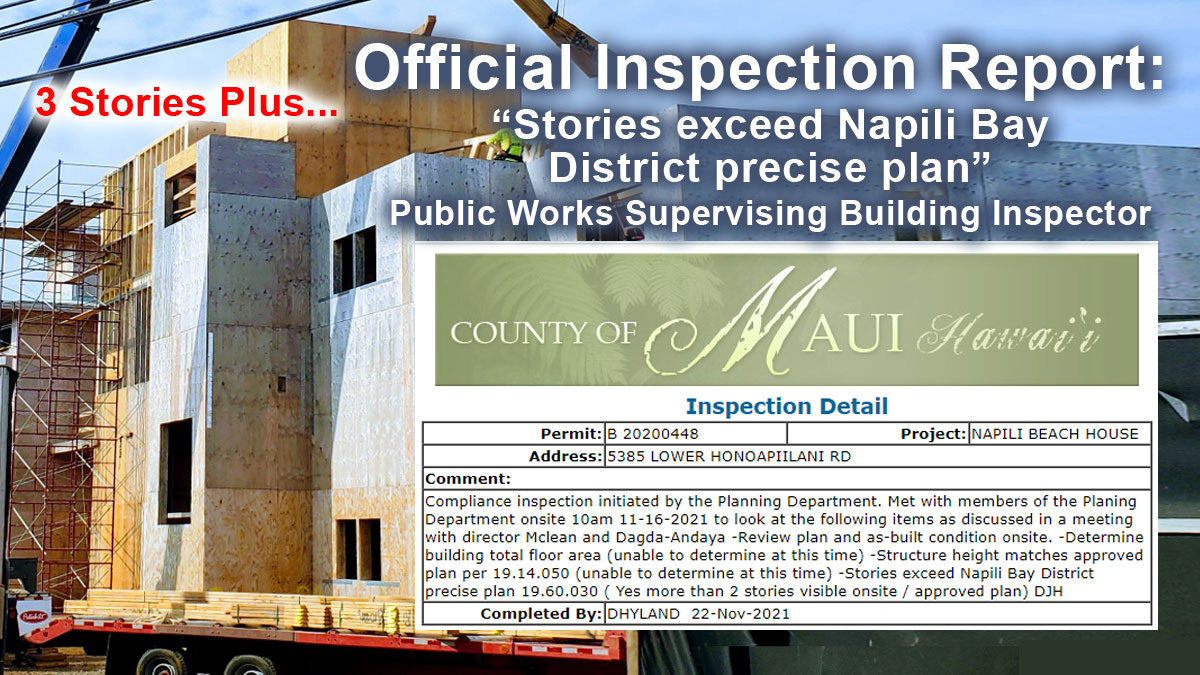 The Council is wisely looking at the schedule of extremely low fees for various Public Works and Planning permits and appeals that greatly subsidize professional developers’ speculation, at the public’s expense.

Please consider here the enormous departmental costs that Planning Director McLean and Corporation Counsel continue to waste by steadfastly refusing to acknowledge what was made perfectly clear last April, that in Napili Greg Brown is building to hotel specifications and never was eligible for the SMA permit exemption he misrepresented to get.

That stop-work order did not get issued last week specifically because Corporation Counsel inappropriately stepped in to block Public Works from performing their legitimate municipal function.

In those seven months, Mr. Brown brazenly continued incurring construction costs that he will sacrifice when he is ultimately forced to tear down his eyesore, at his expense.

Mr. Brown will have no standing to sue the County for convincing (or paying) Planning Department officials to approve his misrepresented building plans because of language in Title 16 of the Maui County Code section 105.4 Validity of permit:

Essentially, because of Mr. Brown’s own misrepresentations, his building permit and his SMA permit exemption are now both rendered invalid.
The substance of Chris Salem’s original claims have been validated by inspectors at Public Works:

Mr. Brown never did qualify to apply for the SMA permit exemption he was granted and not only because his square footage count exceeds the 7,500 eligibility limit.

Mr. Brown’s plans are labeled “Single Family” but they also clearly show elevations of 35 ft with 10 ft additional for elevators and staircases, which is only allowed for Hotels. Regardless of the Napili Bay District not having any height restrictions, Hotels are just not eligible for SMA exemptions, at all, anywhere!

For reasons that have been widely suspected to involve payoffs, officials in the Planning Department “mistakenly” approved Mr. Brown’s plans even though they are clearly in violation of Title 19. Two senior planning officials who issued Brown’s exemption and approved building plans have recently and suddenly resigned.

Mr. Brown’s stop-work order was to be issued by Public Works, not by Planning Director McLean who may be held personally liable for acting outside of her authority by delaying the issuance of violation notices to both Mr. Brown and to Developer Lot 48 LLC, another well-documented, west side development where Mr. Salem has blown the whistle on falsified SMA documents which allowed developers to deny citizens of our rights to public hearings.

Had public hearings not been blocked by professional consultants committing fraud and covered up by County officials, neither of these projects would ever have gotten built. Director McLean’s resistance to issuing notices of obvious violations seems intended to protect that fraud from being exposed and prosecuted.

If Corporation Counsel continues to block the issuance of this stop-work order, that too will be only in their misguided attempt to protect past and present corruption from being exposed. Let us note again that Mr. Brown’s attorney in all this only just recently removed himself from his position at Corporation Counsel.

Director McLean has repeatedly claimed that she was not personally involved in issuing Mr. Brown’s SMA exemption or approving his building plans. The approval was made shortly after she became Planning Director and her name is on the approvals, yet she has stated repeatedly that she wished those approvals had never happened.

The Planning Department did recently issue a notice of violation to Mr. Brown over a retaining wall that he brazenly built that was never included in his original SMA permit application. It has now been discovered that just prior to his resignation, a Planning Department official took the very questionable step of issuing an “After-The-Fact” SMA permit for just the controversial wall. How can a wall which is supposed to be based on steel-reinforced concrete footings be approved “after-the-fact” with no visual inspection of those underground footings?

Just like Kanamu Balinbin who came forward to admit in County Council testimony that in the past he delivered brown envelopes of cash to the Planning Department, there are professional contractors who have worked at Mr. Brown’s site who have now come forward to admit knowing that the grading and walls at Mr. Brown’s site are grossly insufficient for the purposes, in violation of building codes and dangerous to the surrounding community.

Director McLean has the authority to override and invalidate the after-the-fact permit for the bogus retaining wall and should do so today.

Many thanks to the honorable officials of Maui’s Public Works Department for standing up to the small group of apparently corrupt staff members of the Planning Department, several of who have recently resigned, and Director McLean who’s resignation the community is now calling for as well.

It’s up to the County Council to legislate closing the loopholes identified by Chis Salem that have allowed this kind of abuse to happen on Maui repeatedly for decades.