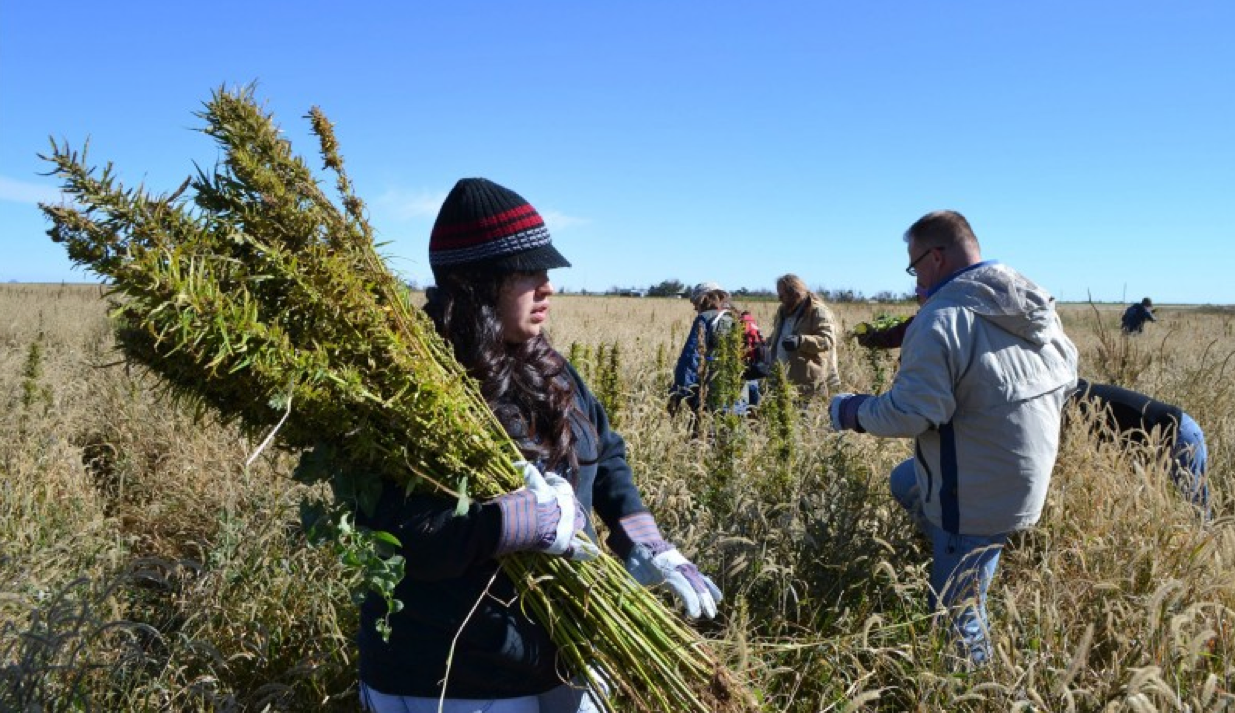 Oh, the irony. On the one hand, marijuana and hemp activists have been tortured for decades by the DEA’s exceedingly absurd stance that marijuana growers will use industrial hemp fields to camouflage their marijuana plants; and on the other hand, there has recently arisen the hysterical stance by some populations of outdoor marijuana growers that marijuana and industrial hemp fields must be kept extraordinary distances apart in order to avoid cross-pollination. To be sure – whereas the DEA stance is unequivocally non-factual and has no basis in reality, the cross-pollination hysteria is actually grounded in truth, albeit recently a distorted and emotionally-based version of the truth. Greed inspires irrationality.

Let’s have an intelligent conversation based in fact because there is no need for hysteria and cross-pollination is a common agricultural issue with a common agricultural solution…and one that would never require a distance of anywhere in the realm of 200 miles between plant species types. We don’t see the State of Kentucky in an uproar. Make no mistake, Kentucky’s Number One cash crop is outdoor marijuana while Kentucky simultaneously is the country’s Number One industrial hemp producer (both feral [i.e. leftover/wild] and deliberate, now that it is legal to cultivate there).

No doubt it will be helpful to found our discussion on a necessary botany lesson, especially since the most common misunderstanding about the “difference” between marijuana and industrial hemp is that “hemp is ‘the male’ and marijuana is ‘the female.’” In fact, nothing could be farther from the truth. “Cannabis” is the plant genus, “sativa” is Latin for “sown” or “cultivated” (and is included in many scientific plant species names), and the “L.” we often see associated with Cannabis sativa merely stands for the surname initial of Carl Linnaeus, the Swiss botanist who invented taxonomy. Cannabis sativa is a member of the Cannabaceae family. Within the Cannabis sativa plant species, we have the drug type known as “marijuana” and we have the oilseed and fiber type known as “industrial hemp.”

Both plant types – marijuana and industrial hemp – can be dieocious, which is to say they can be either exclusively male or exclusively female; and they can also be monoecious, which is to say they can have the staminate (i.e. the male pollen-producing part) and pistillate (i.e. the female ovum-producing part) on the same plant. However, marijuana is a high-resin crop generally planted about four feet apart for its medicine or narcotic rich leaves and buds, whereas industrial hemp is a low-resin crop generally planted about four inches apart for its versatile stalk and seed. The different kinds of marijuana are classified as “strains” and the different kinds of industrial hemp are classified as “varieties” and “cultivars.”

Industrial hemp is non-psychoactive with a higher ratio of CBD to THC, thus smoking even several acres of it will not result in achieving a high; conversely, only a memorable headache is achieved, regardless of Herculean effort. Marijuana flower production and industrial hemp production cultivation processes are distinctly different. Finally, there is no such thing as a plant or plant species known as “Cannabis hemp” and “hemp” is not a synonym for “marijuana,” “pot,” or “ganja,” etc. Botanists have argued for ages over whether a separate plant species “Cannabis indica” exists, and that age-old debate is not being addressed here.

The significant difference between the two types that effects cross-pollination and legitimately frightens marijuana growers is that hemp plants go to seed fairly quickly and would thus pollinate any marijuana plants growing in the same field or in a nearby field. This is botanically analogous to field corn and sweet corn, one of which is grown for human consumption, and one of which is grown for animal consumption. Corn producers take great measures to prevent any cross-pollination between their field and sweet corns; including growing the different varieties of corn at different times or making sure there is sufficient distance between the different fields. Either way, these corn producers do what is necessary to ensure that pollen carrying the dominant gene for starch synthesis is kept clear of cornsilks borne on plants of the recessive (sweet) variety.

Industrial hemp is primarily pollinated by wind, and most pollen travels approximately 100 yards, give or take. Bees, of course, can also pollinate hemp; and bees travel up to three miles from their hives. It is also true that, depending on the weight and size of any plant pollen, combined with other natural conditions, wind-borne pollen can technically travel up to 2,000 miles away from the source. Yes, it’s true, up to 2,000 miles. And also it would be beyond ridiculous to give serious agricultural consideration to this extreme factoid for entirely obvious reasons.

Cannabis case in point: Kentucky. Kentucky may not have legal outdoor marijuana grows, but you’d better believe that – like every other state in the nation – there’s a whole lotta marijuana being deliberately cultivated outdoors; and on quite a grand scale in Kentucky, which state learned centuries ago that Cannabis grows exceedingly well in that climate and soil. Kentucky was always been the heart of our nation’s industrial hemp farmlands, thus Kentucky is covered with more feral hemp than any other state. This issue of marijuana and hemp cross-pollination is old news and no news at all to the marijuana growers of Kentucky, who experience and demonstrate no sense of hysteria like that which has risen up in Washington.

Global industrial hemp leader and professional industrial hemp agrologist Prof. Anndrea Hermann, M.Sc, B.GS, P.Ag., who has been a certified Health Canada THC Sampler since 2005 and is the President of the U.S. Hemp Industries Association, has assisted with creating and reviewing hemp regulations in Canada, the European Union, South Africa, Uruguay, Australia, New Zealand, and several U.S. States. Anndrea refers to this issue of cross-pollination as the “Cannabis Clash” and “Cannabis Sex 101.” So what is the answer? What is a safe distance between marijuana and hemp fields?

The Association of Official Seed Certifying Agencies (AOSCA), which is the global agency to which most developed countries subscribe for agricultural purposes, has completed its draft industrial hemp seed certification regulations, which rules include a range from a minimum distance of three (3) feet to a maximum distance of three (3) miles between different pedigrees and cultivars of industrial hemp. This is the same with Health Canada’s industrial hemp regulations. But we are talking about safe distances between two plant types – marijuana and industrial hemp. Absent intense research and collection of hard data that will be interesting to conduct as we move forward and funding becomes available, experts agree that a distance of ten (10) miles between hemp and marijuana fields is exceedingly appropriate to avoid cross-pollination. Or as Anndrea Hermann would say, “a nice, country road drive!”

This is not a complicated issue or a new issue. This is basic agriculture. Marijuana and industrial hemp are best friends and this is no time for them to start picking unnecessary fights with one another. Ten miles, folks; ten miles!

Joy Beckerman is the President Hemp Ace International LLC, and the director of the Hemp Industries Association, Washington Chapter