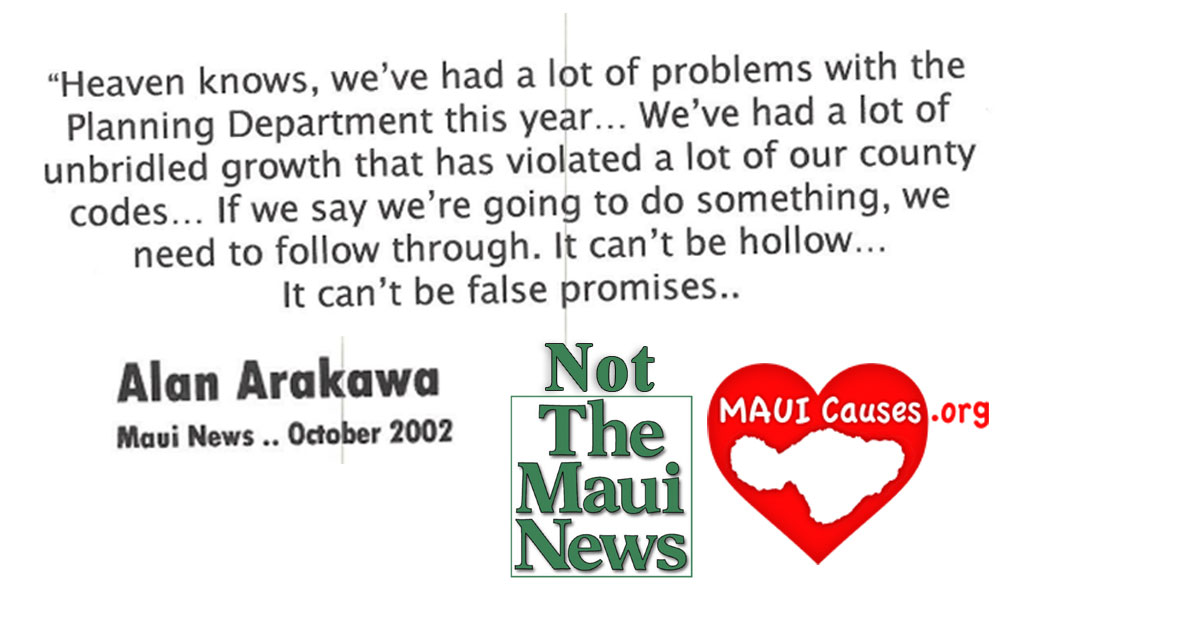 In 2002, Mayor Alan Arakawa admitted to blatant and intentional violations of County Code by developers, consultants, and the Planning Dept, implying the promise of change.

One trigger for his comments was Montana Beach, where a citizen’s complaint famously revealed a Director’s faulty decision, causing a permit revocation. Mike Victorino sat on the County Council in 2008 to approve well over $ 4 million of public funds to settle multiple lawsuits.

In 2011, Mike Victorino was also on Council for the $ 14 Million Palama Drive debacle, this time when citizens exposed Mayor Arakawa himself for acting outside his authority and the law to benefit a developer at the public’s expense. The County now owns and wastes our tax dollars yearly to maintain that land and its huge and crumbling retaining walls.

So over nine years time, Mike Victorino was a direct witness of Alan Arakawa’s transformation from “Defender” to “Violator”.

The same transformation of Mike Victorino seems to have happened much quicker.

Having personally witnessed the damage corruption can do, in 2019, Mayor Victorino hired Chris Salem as his Legislative Laison to work with the County Council to close the loopholes that for decades, the Mayor acknowledged, have allowed a small group of developers, consultants, and corrupt County officials to cheat the rest of us.

Just two short years later, Mayor Victorino wrongfully terminated Chris Salem as retribution for responding to community complaints and exposing Greg Brown’s collusion with County officials. The most responsible of those in the Planning Dept. have recently resigned.

Today, instead of taking a firm hand to protect the community, Mayor Victorino is allowing Planning Director McLean to manipulate the issues at Napili Bay in favor of allowing Mr. Brown to keep building his monstrosity or, at the very least, set the stage for an eventual settlement with Brown at the public’s expense.

In reality, regardless of any approvals that he may have paid someone to get, because of his sloppily-applied permit misrepresentations, Greg Brown has himself invalidated both his building plan approval and more importantly, his SMA permit exemption, which robbed Maui’s citizen’s of our rights under several laws.

Virtually everything Director McLean is currently saying publically is a lie:

Greg Brown’s violations were not just recently discovered, they have been widely known since last April when Chris Salem first blew the whistle to his boss, Mayor Victorino.

Mr. Brown’s plans are not vague, they clearly included details that are in direct violation of County Code, from the beginning.

Director Mclean has absolutely no authority to allow Greg Brown to simply make a few changes to what he’s building and continue. Her direction will surely land the County in court, again, as several citizen groups have already pledged to sue if Mr. Brown is allowed to continue.

The local media keeps quoting Greg Brown saying that he has been building in strict accordance with his approved plans. And from what we hear, he has been faithful to those plans.

Mr. Brown’s problem is that his plans, as approved, violate multiple County codes and it is very clearly laid out in Title 16 of the Maui County Code’s “Validity of Permit” that getting illegitimate plans approved by the County does not magically make them legitimate .

Regardless of any previous approval, illegitimate plans, once discovered for what they are, are invalidated. This is because the County puts its full faith and credit into the Architect or Engineer who stamped the plans. If they lie, boom, Game Over!

Because the plans his architect stamped and submitted to get his SMA exemption violated code, Mr. Brown must go back to square one and re-apply for a new SMA Permit and this time he will NOT receive the exemption that robbed the community of our rights .

Our community is tremendously fortunate to have had Chris Salem as our advocate on these matters for the past 20 years. Chris’s contributions have been enormous and have come at great pains to him and his family.

Before Mayor Victorino wrongfully terminated Chris Salem as Legislative Laison, Chris had been working on revisions to the County’s administration of SMA rules with Council Member Shane Sinenci’s office. Member Sinenci has a degree in Architecture and is well-positioned to champion the changes that will support our community. Hopefully, he will pick up the gauntlet and run with it.

We believe that effort can be greatly supported by the recent advancement of Mr. Derek Hyland to his position as DSA’s Supervising Inspector.

Mr. Hyland has stellar credentials and experience in the municipal administration of development and appears more than willing to educate the Council on how badly Maui’s historic and current administration of Public Works and Planning is both violating the law and failing the community.

The community gives thanks for Inspector Hyland’s insistence that the County abide by both professional best practices and our established ordinances, which has resulted in the two Stop Work orders that were issued to Mr. Brown.

Based on what has been officially documented of Mr. Brown’s violations, there are more violation notices and Stop Work orders that Director McLean is required to issue. Her refusal to do so is a further violation of law.

If you can, please support Maui Causes and others in our community who are working hard to expose corruption and get Maui’s County Council to approve legislation that plugs the loopholes in Public Works and Planning.

For the first time ever, there are individuals in positions of authority within the administration who agree that change is needed and are taking action to stop the madness.

Support us in supporting them by making a non-tax-deductible contribution. Click here to show your support:

PS. If you have not yet done so please sign our petition: