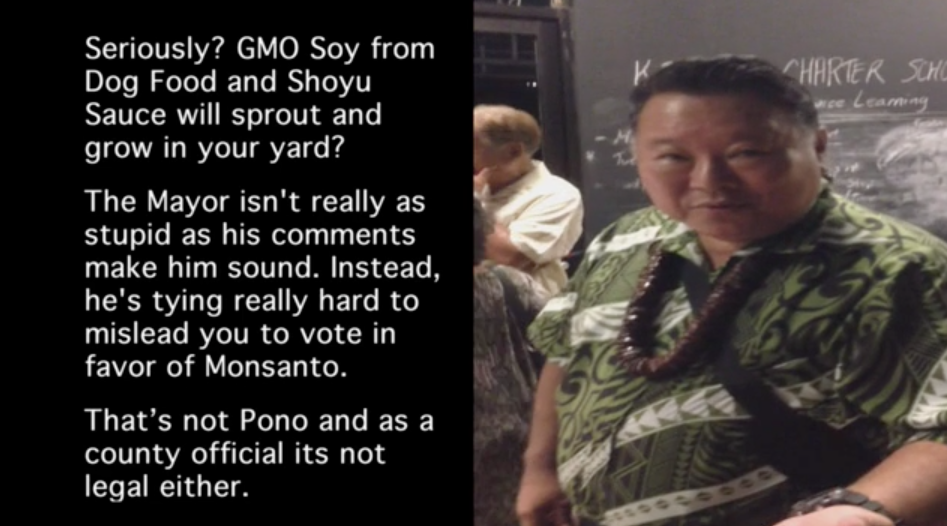 Monsanto says only Maui’s Mayor can defend our Election Win in court.  And we know how much Arakawa loves Monsanto…  Here’s Alan lying to the public for Monsanto:

Law360, New York (October 29, 2015, 11:41 PM ET) — Monsanto told the Ninth Circuit on Thursday that a bid by a citizens coalition trying to revive a Maui County, Hawaii, law restricting genetically modified crops should be dismissed for lack of standing since the citizens aren’t elected officials or county agents.

According to Monsanto Co., the appeal brought by the Shaka Movement — which sponsored the ballot initiative for a county ordinance restricting the cultivation of genetically modified crops — should be dismissed for lack of standing since Maui County itself hasn’t appealed a district court decision that struck down the law on preemption grounds.“In this case, the only adverse party with a direct stake in the outcome — the county — has chosen not to appeal. The only parties pressing an appeal are the initiative proponents, who intervened below to defend the constitutionality of the ordinance they proposed and supported.”Monsanto says U.S. Judge Susan Oki Mollway’s June ruling didn’t injure the group in any constitutional sense.

The judge didn’t order them to do anything, or to stop doing something, and under theU.S. Supreme Court ruling in Hollingsworth v. Perry — which held that backers of California’s ban on same-sex marriages lacked standing to defend the law — the fact that the group sponsored the initiative didn’t give them the direct stake in the outcome of their appeal that would confer standing, Monsanto argued.

“[Hollingsworth v. Perry] establishes a bright-line rule: The only party with a cognizable independent interest in defending the constitutionality of a generally applicable local law is the locality, and the only persons permitted to assert that interest in federal court, accordingly, are the locality’s elected officials or other agents,” Monsanto said.

In June, the judge said the ban directly conflicted with a 1987 regulation enacted by the U.S. Department of Agriculture that allows genetically engineered organisms under certain circumstances, and is therefore expressly preempted by the federal Plant Protection Act.

Judge Mollway also ruled that the ban was preempted by state law and it exceeds the authority delegated to Maui County, as stated in the Maui County Charter.

Monsanto, Dow subsidiary Agrigenetics Inc. and the Hawaii Farm Bureau Federation of Maui County brought their suit just days after the ballot initiative was approved, with 51 percent of the vote, in November. Dow and the other parties claimed the ordinance would hurt Hawaii’s seed industry, which contributes $84 million annually to the local economy.

Shaka has argued that the ordinance is needed to protect the health of local citizens and environmental resources.

However, Monsanto contended that the group has demonstrated “no concrete personal stake” in the ordinance, and that its members offer little evidence that they have have personally suffered any harm from genetically engineered farming or any reason for future harm.

“That is hardly surprising,” Monsanto said. “[Genetically engineered] farming has co-existed in the county for many years without causing any harm to the county or its residents.”

The appellants are represented by A. Bernard Bays, Karin L. Holma and Michael Charles Carroll of Bays Lung Rose & Holma.

We know how maui’s mayor Alan Arakawa thinks bout GMO’s here he is lying to the public, saying that under the GMO moratorium police will raid you backyard to see if GM seeds from dog food has sprouted and is growing in violation of the law. What an ….