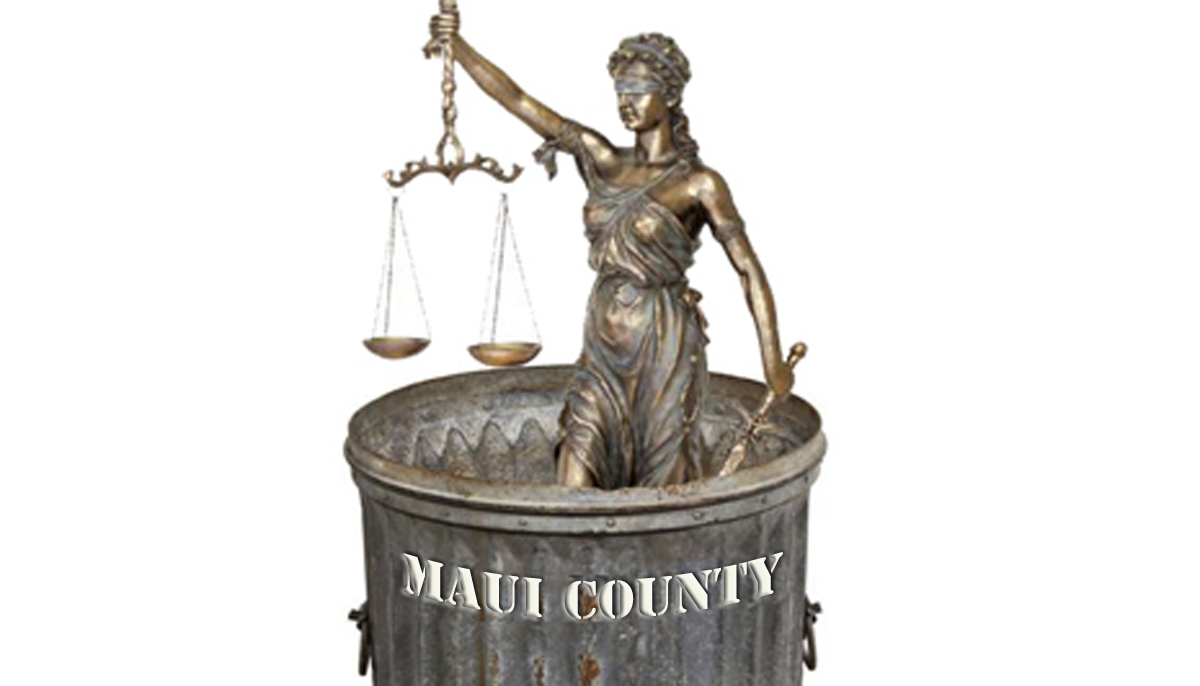 This form of assessment by the administration violates the Maui County Charter. Assessments must be adopted by ordinance by the Maui County Council and placed in the County Budget after annual public hearings. A politically appointed director cannot dictate the amounts owed.

As a bankruptcy and criminal law attorney who has just learned that my own home has one of these defective liens on my property, I conclude this form of infringement of land title is unconstitutional. Simply put, a government cannot record an encumbrance on a citizen’s land that can lead to a taking without some form of valuation or ability for the property owner to remove the cloud on title.

The liens are a result of incomplete developer subdivision improvements along property frontages that were “deferred” by the Department of Public Works through a subdivision ordinance adopted by the Maui County Council in 1974. My findings conclude the original intent of the ordinance was to provide relief for local families wishing to divide their land into parcels involving 3 lots or less.

Unknown to the public for almost four decades, the administration and corporation counsel has secretly expanded the recordation of the “3 Lots or Less” deferral agreements to include massive tracts of land resulting in large subdivisions, commercial properties, and multi-family condominiums.

Unknowingly, citizens end up picking up the developer’s entire roadway improvement tab costing taxpayer’s millions of dollars. The developers end up paying nothing. The administration and corporation counsel continue to deny any wrong doing. The fact they have concealed these developer deferral agreements from our elected council members and the public for 13 years speaks otherwise. They have deemed the public requests for full disclosure “an interruption of a legitimate government function.”

Through the exhausting efforts of West Maui resident Christopher Salem, a 13 year battle to obtain copies of these subdivision agreements from corporation counsel has been accomplished with the quiet efforts of unnamed employees of the County of Maui. One by one, thousands of properties affected by the illegitimate recorded agreements have been cataloged and plotted on Google aerial maps. The degree of manipulation of the Maui County Code is appalling. Evidence now suggests a similar abuse has occurred with uncollected developer park fees.

The administration and corporation counsel have knowingly and intentionally shifted private developers’ financial obligations to the public. This is an inexcusable violation of Section 9-12 of the Maui County Charter which allows for government officials to be held personally liable and be removed from office for incurring a public expense in violation of the policies and procedures adopted by ordinance. It doesn’t take a lawyer to figure out how the dishonorable exploitation of the Maui County Code has already resulted in public funds being spent on private developer obligations.

Mayor Arakawa attempted to clean up this mess by instructing JoAnne Johnson Winer and Christopher Salem to adopt through legislation a formula of assessment. Going against the mayor’s wishes, corporation counsel slammed the door on a resolution to shield their questionable decision-making.

For property owners, the harmful effect of these open ended liens is just beginning to be realized. Prominent professional appraisers and real estate brokers in Maui County have denied representation of properties with these unexplainable county clouds on citizens title. The potential ripple effect on bank loans and real property disclosures is overwhelming.

I am stepping forward to alert my fellow citizens of the destructive impact of these unexplainable clouds on our property titles. Citizens of Maui County are called upon to demand their elected officials to investigate this administrative misconduct to prevent escalation to the courts. These developer liens must be immediately removed from our property titles.

To protect your property rights, contact Public Works Director David Goode (270-7845) and your elected representatives to demand full disclosure on the county website of all properties affected by these illegitimate county liens.

Here’s a write up by Maui Time Weekly from 2013 http://mauitime.com/culture/wondering-if-the-county-of-maui-will-ever-clean-up-the-mess-known-as-deferral-agreements-and-collect-the-unpaid-debts-owed-to-tax payers/