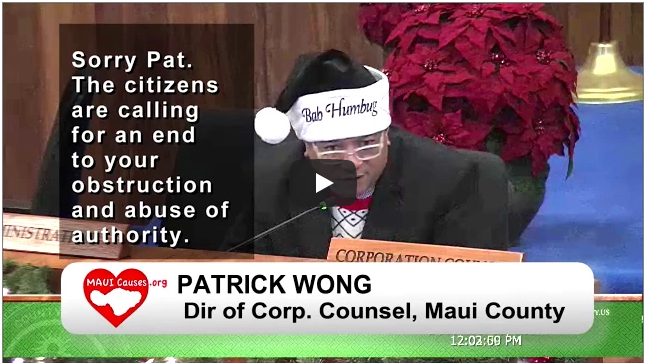 Please sign our petition and make a contribution the help spread the word.

Hundreds of Millions of Dollars is missing from Maui’s tax coffers because Mayor Arakawa and his lawyer, Pat Wong refuse to collect on the thousands of Deferral Agreements that the County has extended illegally over the years to private developers, sometime two or three times on the same property.

We also now have clear evidence of collusion in the Planning Director’s acceptance of fraudulent Special Management Area Permit applications to allow licensed consultants and their developer clients to intentionally avoid both public review and the cost of environmental protections, in violation of Federal Coastal Zone Management Laws.

All of this systematically sucks our tax money out of the budget to the benefit of private developers, while our environment suffers ongoing harm.

Over the years Individual County Council Members have tried to stop this abuse but the Mayor’s lawyers have stonewalled them all.

So, just as in Montana Beach, Palama Drive, and Olowalu, where only citizen action brought corruption to light, a private citizen has now filed a lawsuit in Federal Court against the departments of Corporation Counsel, Public Works and Planning for fraud and their ongoing cover up of that fraud, which includes obstructing access of public documents to citizens and Council Members, and lying in their declarations to Court Judges.

Without doing any investigation into possible wrongdoings, Mike White, as Council Chair and Chief Procurement Officer, has taken it upon himself to approve spending our tax dollars to blindly and vigorously defend the Administration’s acts.

With little hope that the Current Council, under Chair White, will ever do the job the people need them to do to protect our interests and our environment,  Maui Causes conceived and has executed a public petition calling on the County’s Independent Auditor to assess our financial loss, make the legal determinations that will facilitate millions of dollars of financial recovery, and identify what administrative loopholes to close in order to shut this Good Ol’ Boy exploitation down for good.

Our petition asks the auditor to addresses both 3-Lot-or-Less Subdivision Deferral Agreements and SMA Permit abuse, as they are both areas where those in-the-know know, no one has been watching. Dollars to donuts if the auditor looks at a parcel with multiple overlapping deferral agreements and an SMA permit application with an order of magnitude statement just below the threshold to get an SMA Minor permit instead of an SMA major, that order of magnitude statement will be fraudulent.

Maui Causes brought our petition to Council Member and Chair of the Litigation Committee, Don Guzman, who embraced the idea, at least in part, proposing to the council a resolution also asking the County Auditor to investigate, but only the deferral agreements.

Maui Causes was proud to submit to the Council nearly 1500 signatures in support of our petition, which we feel helped propel the Council to approve Guzman’s resolution 9 to 0. Even Mike White embraced the idea of the Council pawning the issues off onto the County Auditor.

Maui Cause has launched a crowd funding campaign so we can continue to collect signatures on our petition for a deeper, more through investigation, which we will soon present to the County Auditor for his consideration.

With your help we can end the decades of corruption and use these issues to help launch of our next petition to put on the ballot a revision to our County Charter that will change the structure of our county government so that it better serves the people’s and our environment’s best interests, rather than allowing big money and Good Ol’ Boys to exploit us all.