Thank you for taking the time to meet with me Oct 9th to discuss the liabilities transferred to taxpayers from private developers via the thousands of uncollected “Three Lots or Less” subdivision infrastructure deferral agreements and apparent SMA (Special Management Area) permit manipulations.

To recap: Public Works Director David Goode essentially admitted in public testimony to the Budget and Finance Committee on April 19, 2012 that by writing overlapping deferral agreements on certain parcels repeatedly, Public Works and Corporate Counsel violated the clearly stated requirement of the Subdivision Ordinance that deferrals are to be a one-time event: “The land so subdivided shall not thereafter qualify for this exception with respect to any subsequent subdivision of any of the resulting parcels.”

The transcript of Goode’s testimony reads: “…some deferral agreements, three lots, had another future three lot and a future three lot, so it got subdivided again and again, had different deferrals. And in some cases especially in West Maui, the original three-lot subdivision was a huge piece of land that went halfway up the mountain, and so there’s a possibility there’s going to be some deferral agreements where theoretically there’s 1,000 different owners and they each owe us $25. I mean it’s getting… it potentially is getting really crazy as it relates to us trying to administer it.”

Goode’s “crazy” comment fits, especially since a well-intended code amendment in 2010 only addressed part of the problem and actually made the situation worse.

Before 2010 the county just ignored the agreements it wrote, doing its own roadway improvements and not bothering to collect on any of the deferrals. SInce the 2010 amendment however, if the county does a start an improvement project they are required to issue a “Notice of Intent to Collect” to property owners.

The problem is that the notice triggers the conversion of what was a slumbering, undefined and easily ignored “encumbrance” on a landowner’s title, into a full-fledged, yet still undefined “lien”, with no set dollar figure, that needs to be satisfied before any Real Estate transaction can be completed. What was missing from the amendment was any scheme to assess values or any mechanism to actually collect and release the liens.

Dealing with an undefined lien is an impossible situation that would bankrupt almost any landowner; an assessor can’t make an assessment, so they can’t refinance nor sell their property and there’s no way to pay off the lien to clear their title even if they had the cash to do so.

It appears that at least two roadway improvement projects that the county saw the need to initiate were killed rather than deal with the fallout created by continuing to send out open-ended Notices of Intent to Collect. How long can the county and the County Council, ignore these problems?

Council Member Cochran attempted to pursue the matter with Goode back in 2012 but ultimately hit a brick wall with a response coming from the Mayor’s Office stating that ”After our meeting with our Corporation Counsel on this issue, we are unable to respond at this time on the matter as we are 1) researching the applicability of certain agreements on the ability to seek compensation, and 2) working out a formula for compensation on certain agreements. Rest assured we (Departments of Public Works and Corporation Counsel) are actively working on this issue… ”

Now, five years later, Public Works and Corporation Counsel still have done nothing to resolve any of the deferral agreements. Thousands of homeowners still have no way to remove these open-ended encumbrances from their titles and roadways are deteriorating and flooding because the County is avoiding much-needed improvements.

On March 22, 2014 Goode publicly set the stage for the County’s continued inaction by writing a Viewpoint for the Maui News. Goode relates what County Ordinance 18.20.040, in effect from the 1970’s up to 2007, requires of subdividers: “If the subdivider elected to defer the improvements, he/she would be required to compensate the County of Maui for the cost of the improvements when performed by the county. To ensure that this was done, the subdivider was required to enter into an agreement to compensate the county for the improvements when performed”

Later in the same editorial Goode completely misrepresents the ordinance and casts uncertainty upon the requirements made of the subdividers when he ignores the consistent use in the language in the ordinance of the word “shall”. Goode wrote “As explained, the agreements state that if and when the County of Maui does a capital improvement project along a roadway fronting a property that has one of these agreements recorded against it, the county may recover the costs of doing those improvements that were specifically deferred.” The actual ordinance never once includes the word “may”, only the word “shall” is used.

Goode wrote that should anyone, “wish to legally challenge the agreements, they may do so, but will be unsuccessful as the agreements were authorized by law.” Clearly Goode is wrong. The deferral agreements that were applied over and over again to the same original parcel, in direct violation of the ordinance, actually violate the law and are likely not legally enforceable at all. Whether Public Works and Corp Counsel knew they were writing unenforceable agreements is another question.

One possible avenue that Maui Causes is considering is to petition the County Auditor to assess the amount of recovery to the taxpayers that has been lost by not collecting on these deferral agreements and how to recover that value. But perhaps asking the auditor to spend time and taxpayer’s dollars to assess deferral agreements is premature. Perhaps the action should be instead to demand through the Mayor’s office, that Corp Counsel do what they said they were going to do back in 2012, to make a determination as to which, if any, of the deferral agreements can be collected on and, if so, what the calculation of those collections would be.

Is this a demand that can reasonably come from your office?

Council Member King brought this matter forward in May of this year and it was redirected as Item 32 of the Infrastructure Management Committee, waiting to be scheduled by Committee Chair Cochran. Meanwhile I can share with you that a grassroots initiative is rapidly gaining traction that would launch a class action suit which, in addition to Corp Counsel, would also name the County Council negligent for not adopting a formula to assess, collect and clear these encumbrances from thousands of homeowner’s titles. To facilitate being able to act on Item 32 and to protect the reputation of the Council, I think it prudent to demand Corp Counsel make the determinations they promised back in 2012 and place the burden of inaction squarely back onto the Administration.

Deferral agreements aside, Maui Causes still intends to create a public petition of the County Auditor to assess the losses to the taxpayers that appear to result from exploitations of loopholes built into the administration of SMA permits, and inappropriate permit exemptions issued at the sole discretion of the Planning Director, a political appointee of the Mayor. It seems to us that Public Works and Planning facilitate well-connected private developers using these loopholes and exemptions to subvert County zoning ordinances, shift financial burdens from private developers onto the backs of taxpayers, and avoid installing such things as storm water retention ponds, the lack of which does irreparable and incalculable harm to our beaches and reefs with every heavy rain.

Olowalu is a recent example of a private developer being brought back almost 10 years later to fulfill their SMA permit obligations which fell through the cracks when they thought no one was looking. We believe the thousands of exemptions and SMA permit minors issued by politically appointed Directors, which denied citizens of our rights to public hearing, shoreline preservation, public right of ways and even park fees, should be audited. The Council needs to act to ensure all developers meet their obligations and, as well, enact legislation to close the loopholes and bring a more appropriate level of professional oversight and checks and balances to the politically appointed Planning Commission, to stop future abuses.

Thanks so much for your attention to these important matters. 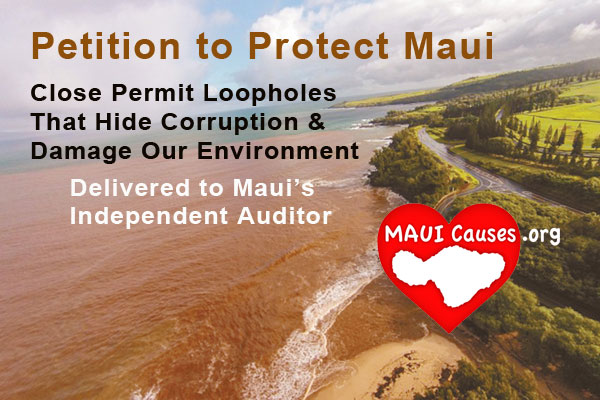