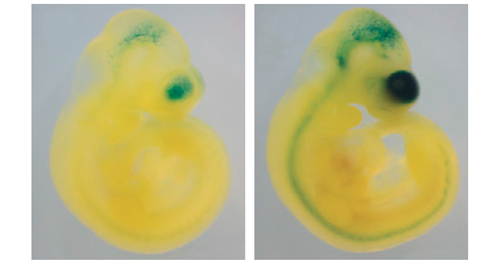 Posted by Christopher A. Berry, ALDF Staff Attorney on May 15, 2015

What are the legal implications for splicing human cells into nonhuman animals? When does an animal become a person—how much human material is required? Where do we draw the legal line? Cutting-edge research in “chimera” science blurs traditional morality and raises critical new questions. And human protection laws may provide the clues we need to solve this puzzle.

Many people would be surprised to discover that for more than a decade scientists have been creating human-animal chimeras by grafting human stem cells into animal bodies. This results in purely human cells replacing some of the animal parts. The effect of this process cannot be totally predicted, but is largely determined by the type of human stem cell, where the stem cells are grafted, and the youth of the animal. Scientists have also been creating transgenic human-animal creatures where human DNA is added to an animal’s genetic sequence. A traditional use of these chimeric and transgenic creatures involves grafting human immune cells into mouse bodies because this is thought to produce more accurate results in biomedical research that uses the mice to study human diseases. But a string of recent revolutionary new research involves humanizing animal brains, resulting in chimeras and transgenics with significantly enhanced cognitive abilities.

In one study from 2013, researchers implanted human glial progenitor cells—a type of brain cell that supports neurons in the brain and contributes to cognitive function—into mice brains, causing a significant increase in mouse learning ability and change in behavior. In another example from 2014, researchers replaced an animal gene with the human FOXP2 gene which is understood to be strongly associated with human language ability. Remarkably, the researchers found that the mice with the humanized FOXP2 gene learned certain information faster than their non-humanized litter mates. Other published experiments have resulted in human glial progenitor cells completely overtaking mice brains, and the human HARE5 gene causing mice to grow significantly enlarged brains. More dramatic experiments are already underway.

Shockingly, there are no laws generally regulating this type of research involving animals with humanized and augmented intelligence. There is no special oversight, no prohibition against creating apes or monkeys with humanized brains, and no requirement that any animals that might eventually exhibit human-like intelligence receive human-like rights. Thus, mere self-restraint holds researchers back from conducting research with even more moral ambiguity than the research already being done. A team that created chimeras where human glial progenitor cells completely overtook mouse brains said that they considered doing the experiment with monkeys but simply “decided not to” because of the ethical issues.

To fill this regulatory void, ALDF filed a formal rulemaking petition with the Department of Health and Human Services (HHS) asking that agency to enact regulations under the Public Health Services Act. The Public Health Services Act imposes a duty on HHS to protect the rights of human research subjects in all federally-supported research. 42 U.S.C. § 289. These protections include informed consent, assessment of risks and benefits, and equitable selection of subjects. 45 C.F.R. §§ 46.101, et seq. Specifically, ALDF’s rulemaking petition asks HHS to enact regulations that (1) require special oversight of all research involving human-animal chimeras and transgenics, and (2) require that animals exhibiting human-like intelligence as a result of those experiments be granted all protection normally given to human research subjects. HHS has until December 2017 to respond to ALDF’s petition.

While the adoption of ALDF’s rulemaking proposal helps promote the welfare of human-animal chimeras and transgenics by requiring additional oversight, the real value is in obtaining personhood status for those animals exhibiting human-like intelligence. As it stands now, the only member of the animal kingdom with personhood status is the human species. By compelling the legal system to recognize that biologically manipulated animals with human-like intelligence and at least a drop of human DNA ought to receive the same rights as human research subjects, we can build a bridge between rights for humans and rights for all the other animals.