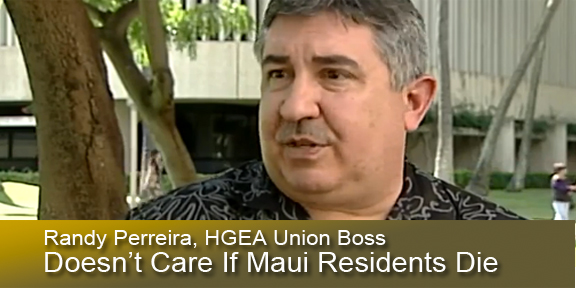 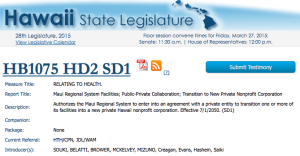 Immediate reductions will be made to non-clinical and non-essential contracts at the state-owned facility — part of the Hawaii Health Systems Corp. .The cuts include 50 to 75 administrative positions, the Maui region board said, adding that this is only expected to save the region a nominal amount compared to its shortfall. Public input is required in order to shut down services. Community meetings are being scheduled and will be announced once confirmed.

“The cuts to our hospitals, facilities, staffing and services we provide our communities will set us back 20 years,” Wesley Lo, chief executive officer of the Maui region, said in a statement.

The decision came after the latest state budget projections, the board said.

“We are limited by the options that we have before us,” Avery Chumbley, a member on the Maui region board, said in a press release. “We knew this day was going to happen and while we understand the state cannot continue to fund our financial shortfalls. For three years we have asked the Legislature to allow us to move forward on a public/private partnership so we could avoid this very day.”

by Andrew Walden, Guest Blogger:
The HGEA-controlled Hawaii State Legislature has rejected legislation to partner the HHSC with private medical systems repeatedly since the 2009 “Stroudwater Report” called for conversion of HHSC from an HGEA job trust to a non-profit hospital system and liberation of the system’s 5,000 employees from the civil service system.   Potential partner Banner Health Systems walked away from negotiations in 2013 after legislators used the excuse that Banner was a Mainland company to reject legislation authorizing its partnership proposal.  HGEA President Randy “F*** You” Perreira takes credit for the collapse of a 2014 effort to pass partnership legislation.  Within the last few days, Kaiser Health Systems announced that it would not be making a partnership proposal to HHSC.

Is this the last chance?  At the news conference, the question draws very different answers from HHSC and HPH:

HHSC’s Wes Lo replies, “I don’t know if this is the last chance or not.  I think we’ve put together a strong offer.”

The difference between the two answers underlines the fact that the HGEA and UPW are toast.  The only real question is how the hospitals will be transformed: Will HHSC be absorbed organizationally? — or — Will private hospital systems such as HPH, Queen’s, and Kaiser step in to create new systems from scratch after the inevitable demise of HHSC?

Rejecting the partnership proposal, the HGEA’s Perreira shows he is happy to continue living in a fool’s paradise.  Perreira tells KITV: “The leadership of Maui Memorial, including their board of directors and a number of physicians, they looking to sell the hospital.  It’s that simple.  And, frankly, their talk of a partnership is a misstatement.  Really, they are looking at an acquisition.”

The partnership proposal actually calls for the lease, not sale, of the Maui HHSC hospital buildings, but the facts don’t matter.  As columnist Richard Borreca explained January 6:

“The HGEA knows change to the hospital contract will not help union members, and a damaged membership will not support the existing union leaders. So stall, talk and then block is the course of action for the HGEA.”

The failure of then-Senator David Ige to deal with the HHSC crisis became an issue during the general election campaign.  Now-Governor Ige told the January 6 Star-Advertiser:

“… we have begun negotiations with (Hawaii Government Employees Association) Unit 9 (nurses) as well as with some of the other units where some of their membership is part of the hospital, so I do know that there needs to be some contract changes that are necessary to make the hospital system function better. I think that that’s kind of the starting point. I think we will be having discussions with the unions and talking about the kinds of things that are essential to allow the hospital system, operating as a government entity, to be successful….”

In a news release distributed at the conference, the potential partners outline their proposed structure and legislative action being requested:

HHSC would enter into a 25-year lease operator partnership agreement with HPH.

What we are requesting