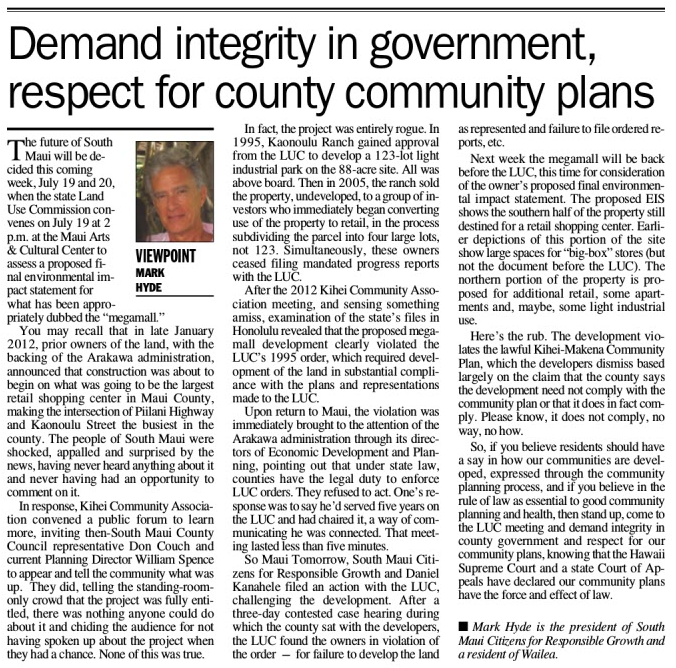 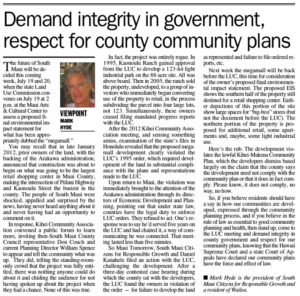 The future of south Maui will be decided this coming week, July19 and 20, when the state Land Use Commission (LUC) convenes on the 19th of July at 2 PM at the Maui Arts and Cultural Center to assess a proposed final environmental impact statement (FEIS) for what has been appropriately dubbed the “Mega Mall.”

You may recall that in late January 2012 prior owners of the land, with the backing of the Arakawa administration, announced that construction was about to begin on what was going to be the largest retail shopping center in Maui County, making the intersection of Pi’ilani Highway and Kaonoulu Street the busiest in the county. The people of south Maui were shocked, appalled and surprised by the news, having never heard anything about it and never having had an opportunity to comment on it.

In response, Kihei Community Association convened a public forum to learn more, inviting then south Maui council representative Don Couch and current Planning Director William Spence to appear and tell the community what was up. They did, telling the standing-room-only crowd that the project was fully entitled, there was nothing anyone could do about it and chiding the audience for not having spoken up about the project when they had a chance. None of this was true.

In fact, the project was entirely rogue. In 1995 Kaonoulu Ranch gained approval from the LUC to develop a 123-lot light industrial park on the 88-acre site. All was above board. Then in 2005 the Ranch sold the property, undeveloped, to a group of investors who immediately began converting use of the property to retail, in the process subdividing the parcel into 4 large lots, not 123. Simultaneously, these owners ceased filing mandated progress reports with the LUC.

After the 2012 Kihei Community Association meeting, and sensing something amiss, examination of the state’s files in Honolulu revealed that the proposed Mega Mall development clearly violated the LUC’s 1995 Order, which required development of the land in substantial compliance with the plans and representations made to the LUC.

Upon return to Maui, the violation was immediately brought to the attention of the Arakawa administration through its directors of Economic Development and Planning, pointing out that under state law, counties have the legal duty to enforce LUC orders.   They refused to act. One’s response was to say he’d served 5 years on the LUC and had chaired it, a way of communicating he was connected. That meeting lasted less than 5 minutes.

So Maui Tomorrow, South Maui Citizens for Responsible Growth and Daniel Kanahele filed an action with the LUC, challenging the development. After a three-day contested case hearing during which the county sat with the developers, the LUC found the owners in violation of the order – for failure to develop the land as represented and failure to file ordered reports, etc.

Next week the Mega Mall will be back before the LUC, this time for consideration of the owner’s proposed final environmental impact statement. The proposed FEIS shows the southern half of the property still destined for a retail shopping center. Earlier depictions of this portion of the site show large spaces for “big box” stores (but not the document before the LUC). The northern portion of the property is proposed for additional retail, some apartments and, maybe, some light industrial use.

Here’s the rub. The development violates the lawful Kihei-Makena Community Plan, which the developers dismiss based largely on the claim that the county says the development need not comply with the community plan or that it does in fact comply.    Please know, it does not comply, no way, no how.