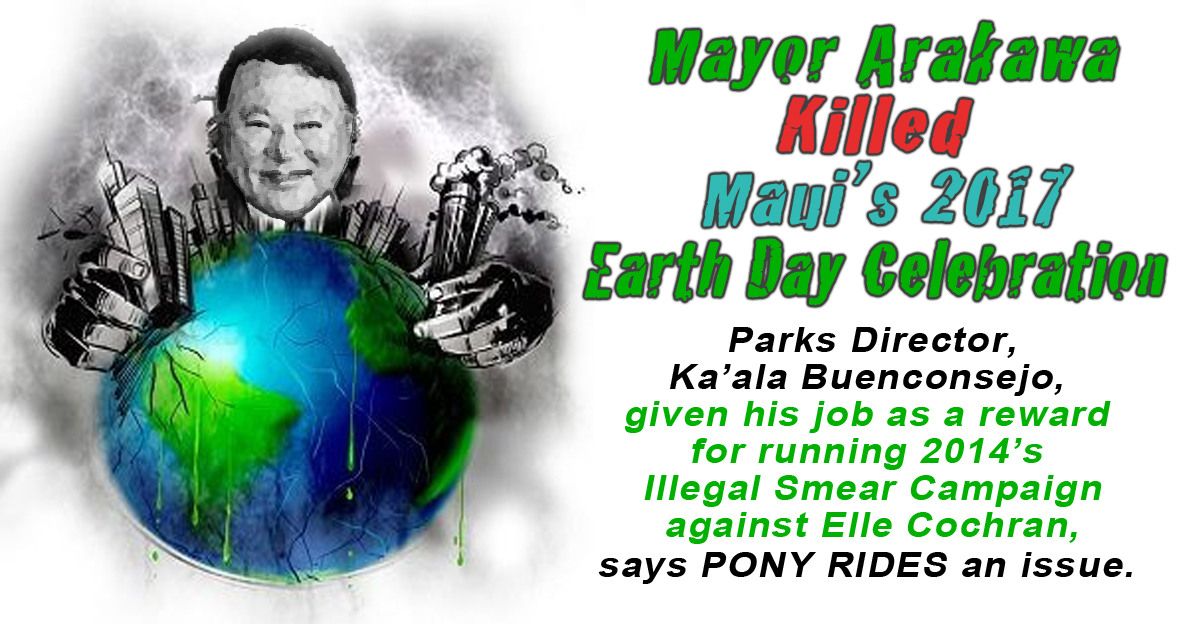 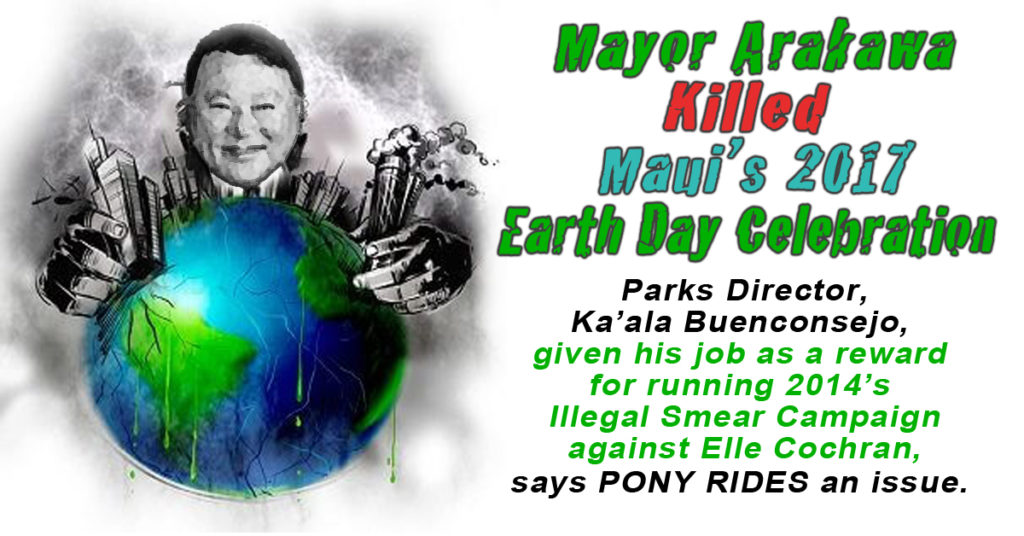 Maui Mayor Alan Arakawa is striking back against his many critics by denying our community the opportunity to assemble, celebrate our connection to Mother Earth  and organize for political change that supports sustainability rather than corporate exploitation.

Maui County Parks Director Ka’ala Buenconsejo, who Awakawa appointed to his job as a reward for running an illegal smear campaign against Elle Cochran in 2014, and who has no qualifications to be Parks Director, cites PONY RIDES as one of the reasons to deny the Earth Day 2017 event application.

Maui resident Bruce Douglas has been staging Earth Day celebrations in Maui County parks for 19 years and for the past seven years its been a very successful gathering at the Keopuolani Amphitheater.

The event features information booths for over 50 environmental and social awareness organizations and governmental agencies.  This year the event was to feature the new pilot program championed by Elle Cochran that brings Maui’s Parks Dept. together with the environmental group Beyond Pesticides to find alternatives to heavy chemical use in selected county parks.

But because our community has become increasingly vocal and successful in supporting political change that protects, rather than exploits the environment, the Mayor has killed Earth Day.

Below is Buenconsejo’s denial letter which offers only minor issues from past events as the reason for this year’s denial. It includes Pony Rides as a problem. Seriously? We know better.  This is an attempt to muzzle our community’s voice and we must stand up to this kind of oppression. Please call the Parks Dept. at (808) 270-7230 and demand our event permit be approved.

Here is Bruce’s rebuttal to the County’s allegations of wrong doings:

1) Parks:  “With an anticipated attendance of 800 participants, has grown to exceed safe usage of that facility.”
Earth Day:  The number of participants of the Earth Day event has remained steady since it was move to Keopuolani Park Amphitheater 7 years ago, and is well within the park’s capacity with no residual effects to the park grounds.

2) Parks:  “Failure to dispose of trash generated from the event within the time allotted by the issued permit.”
Earth Day:  This occurredonly once, 2 years ago, when a heavy rain on Sunday night filled the trash cans with water.  On clean up day Monday the volunteer vehicles could not move heavy wet garbage and the dump closed at 3pm.  We hired a truck and move it Tuesday morning, 12 hours late for our permit.  This is a case of extenuating circumstances.

3) Parks:  “Non-compliance of permitted event hours.”
Earth Day:  The published facility hours are from 7am to 10pm.  We shut down main stage at dusk.  We have sometimes allowed acoustic music to continue in the dome stage after dark that has never cause a noise complaint that we are aware of.

4) Parks:  “Allowing of unsafe vehicle access in prohibited areas during the event.”
Earth Day:  Vehicles have always been out of the event area before opening ceremonies start at 10 am.  Vehicles have never been allowed into the event area until after the main stage has been shut down and most of the participants have dispersed.  The lower entrance (jogging trail) is used for handicap access as well as musician and vendor drop offs, as is done for every other event held at this amphitheater.  Sometimes people have parked along the jogging trail even though we post signs saying forbidden.  This has never created an unsafe situation.

5) Parks:  “Unauthorized addition of activities not approved by the issuing permit, such as pony rides.”
Earth Day:  We have had pony rides on 3 different years under the observation of parks officials and this is the first time anyone has called this use a problem.  We see nothing in the permits or parks publications calling this use unauthorized.

6) Parks:  Failed to satisfactorily clean or restore any park or recreational facility.
Earth Day:  In the spirit of environmentalism, we have consistently restored the park to a cleaner situation then when we found it.  There has never been any lingering impact to the park with the exception of one sprinkler head being damaged, which our park deposit was used to pay for.

Mahalo for your support. 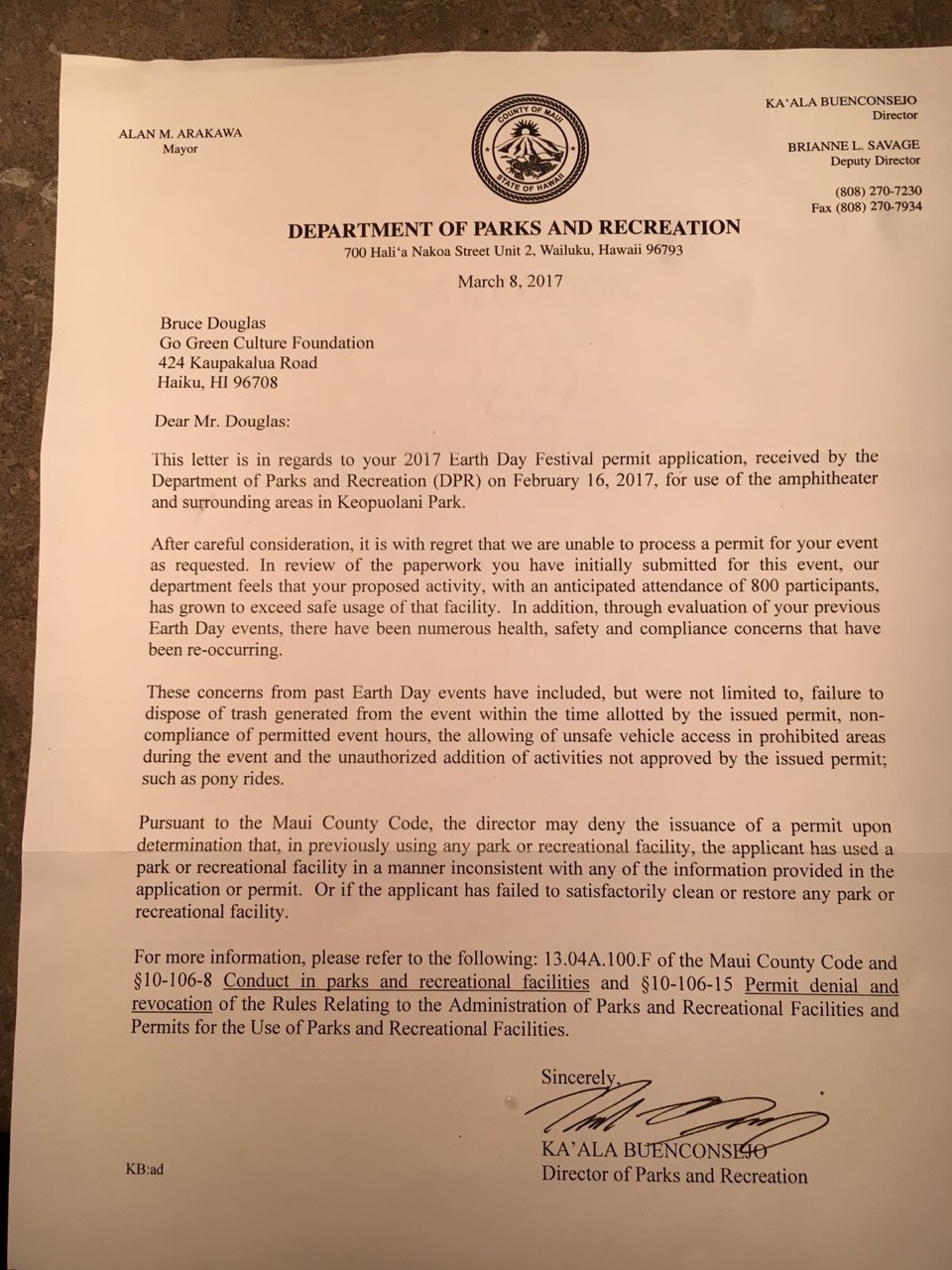