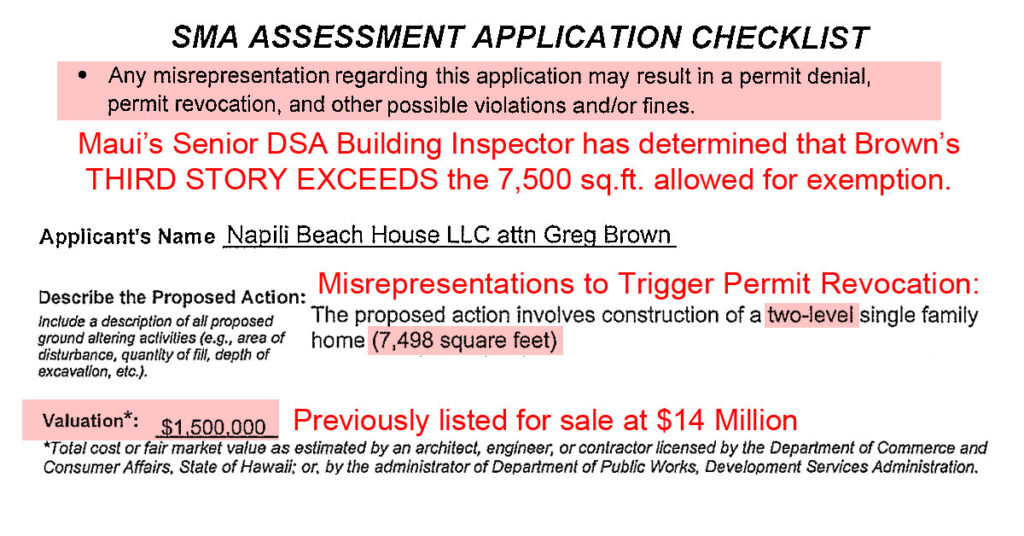 Rather prematurely, Director McLean has several times now publicly characterized this disaster as the “department’s mistake” which seems an intentional misdirection to set the stage for the Council being amenable to some financial settlement with Mr. Brown should litigation arise when the County shuts his project down.

Derek Hyland, the Supervising Building Inspector Maui County DSA, who is qualified to make determinations that Director McLean is unqualified to make, has now made and communicated several determinations that affirm the whistleblower assertions communicated to the Mayor, the department’s staff, and Council Members by Christopher Salem repeatedly since last April, that Greg Brown Construction willfully misrepresented the project as a Two-Story Structure when it is, as per Title 19, Three-Stories Plus.

It is clear then that Mr. Brown is indeed in violation of the Napili Bay District “Two Story” limit.

Mr. Hyland has also determined that Mr. Brown’s permit application failed to include his third-floor square footage count. As such, Mr. Salem is also correct that Mr. Brown improperly secured his SMA permit exemption and denied the community our right to public hearings to protect Maui’s shoreline areas, as mandated by State and Federal law.

Mr. Brown further misrepresented the fair market value of his project at $1.5 Million. Up until the listing was pulled off the market a few weeks go it was listed for sale at $14 Million.

Mr. Brown’s SMA permit application clearly states that misrepresentations are just cause to revoke his SMA permit exemption and that specifically absolves the County of any financial burden for shutting the project down. Counter to Director McLean’s misdirection and fear-mongering of financial risk to the County, our tax coffers could easily benefit from fines levied against Mr. Brown for his subterfuge.

Unlike Director McLean, who is appointed by the Mayor and is free to petition the Council to have her appear to lobby and prejudice the Council for political gains, Mr. Hyland is a Civil Servant and is not allowed to solicit the Council to hear from him.

If the GREAT Committee is to hear of Mr. Hyland’s important determinations, a Council Member must invite him to appear and speak on Tuesday.