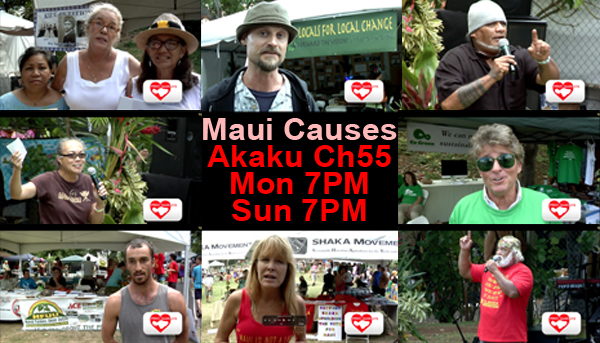 MAUI CAUSES was born out of VOTE YES MAUI, a 501(c)(3) not-for-profit established to do community outreach and education in support of voter registration and the 2014 “GM Moratorium” citizen’s petition and ballot initiative, as an offshoot of the SHAKA Movement.

To influence Maui voters Monsanto claims to have spent $12 million, the most ever for any local election in the history of US politics (that’s not including payments made under the table, which are believed to be considerable). Vote Yes Maui raised $76,000 in an online crowdfunding campaign and spent it very wisely, scoring a stunning electoral victory.

The public education campaign we created was successful in bridging divergent communities on Maui into a cohesive voting block. The local political establishment has acknowledged the new “H Factor; Hippies, Haoles, and Hawaiians”.

Vote Yes Maui was intended to outlive that one election cycle, but after the November victory, the Board of the SHAKA Movement moved to shut the initiative down and shift the organization’s focus away from active community education.

Rather than lose the considerable momentum of public advocacy and participation that was generated by Vote Yes Maui, the initiative was re-branded as MAUI CAUSES and continues to actively produce media content in support of environmental, progressive and not-for-profit causes here in Maui County.

In 2016 MAUI CAUSES helped create THE KULEANA COALITION FOR CHANGE, a 501(c)(4) Super PAC in support of candidates for County Council and State House who were commitment to upholding the Hawaii state constitution’s Public Trust Doctrine, which gives specific rights of protection from exploitation of all-natural resources, for the benefit of future generations. 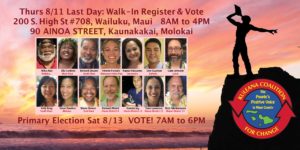 The SuperPAC format was chosen specifically to provide local residents the opportunity to participate in the electoral process and support change-agent candidates through donations without disclosure, so as to avoid suffering retribution under Maui’s oppressive local political and economic power structure.

In 2017 Maui Causes co-created NO MORE CORRUPTION MAUI, a petition initiative calling for the impeachment of Mayor Alan Arakawa and several of his appointed directors, as well as calling for a Federal investigation into racketeering by The Corporation Counsel Pat Wong, who serves at the pleasure of the Mayor, yet manipulates Maui’s County Council as their legal advisor.

No More Corruption Maui’s petitions are intended to generate awareness and solidify public sentiment in support of positive disruption of the status quo and to generate voter initiatives around Charter Revision that bring about District Voting and the elimination of the Office of the Mayor in favor of a Professional Town Manager who will answer to the County Council.

These two changes alone would bring transparency and accountability, placing the authority over Maui County back into the hands of the people and away from the Good Ol’ Boys who have been exploiting the public trust here for far too long.

Maui Causes is currently launching an initiative to produce an hour-long video documentary about corruption that has been taking place for decades through Maui’s Planning Commission and covered up by the Corporation Counsel.

PARADISE LOST will detail; a) How falsified engineering reports and Administrative collusion have exploited Minor SMA permits allowing developers to skirt environmental and performance reviews, which has directly harmed our fragile environment and our communities; b) The continuing shift of financial burdens of infrastructure improvements from developers to the public, deferring, with no mechanism to collect, an estimated $175 million dollars.

To facilitate our growth as a community force, Maui Causes is seeking to establish a Board of Directors and file as a not-for-profit educational organization.

We’d love to hear from anyone in the community who would like to participate in these initiatives.